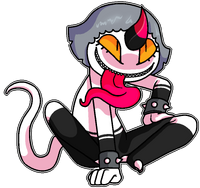 Zavok
Dislikes
Being defeated by others

Zovia is a zeti from Lost Hex. While not seen in any of the games, Zovia was present during the events of Sonic Lost World; she watched everything unfold slowly. Shortly after the events of Lost World, Zovia was taken as a slave by an unknown, mobian-like creature destined to conquer Lost Hex; however, their plans failed, and everything they conquered and took, including Zovia, was set free, and they ended up perishing from existence.

Zovia is a white female zeti, with a "generic" body type. Zovia's upper body is white, with a black stripe just below her stomach, and the lower half of her body, excluding her knees, are black. Zovia's small feet has small, white claws, with a third smaller one on each heel. Zovia also has a long, slender-esque tail, resembling that of a cat's - more specifically, a Sphynx'. Zovia also has a single black stripe on her arms, with the rest also being colored black. However, her hands are pure white.

Zovia has short, gray/gray-ish blue hair with several cuts, and also lacks bangs. She also has a single, curved, incredibly sharp horn in the middle of her forehead, with an alternating black and hot pink coloration. Her eyes have an odd shape, with orange-yellow sclera and black vertical eyes. The most eye-catching thing about Zovia is her long grin, with very sharp teeth, and an incredibly long, pink tongue, that she not only can move with free will, but it is so long, she is unable to keep it inside her mouth. Because of such, she usually has a menacing look.

Zovia, similar to the Deadly Six, is sadistic, malicious, and violent, with an extra touch: she is mischievious and does not care about messing things up. She enjoys seeing things go wrong, and also enjoys seeing people fight - no matter if it is just argumenting or down right brutality. To her, all that matters is that someone - usually her - is having fun in all of the mess that unfolds.

Zovia is also very powerful, not only having the general abilities of a zeti, but also having the ability of being able to turn her head 360 degrees, something that no other zeti can do. Because of this, she also enjoys pranking others and giving them the worst of scares and nightmares.

During the Conquer Of Lost Hex, Zovia was quiet, obedient, and didn't complain. She did everything the mysterious Mobian asked her to do, and did not say a word when Mobian did not appreciate her hard work. Beneath, however, Zovia was pretty much confident things were going to fail (which, of course, failed), and despite saying that "she would never betray Mobian", she just kissed good-bye and abandoned Mobian, who perished shortly after. This shows that Zovia is also great at lying, and can fool practically anyone - even the mastermind of masterminds.

After Lost World and the Conquer Of Lost Hex

The entirety of Lost World was like a theater to Zovia - she enjoyed watching things happen and unfold. However, not long after the events of Lost World, something ended up happening that, well, did not change her life actually: the mysterious Mobian conquered Lost Hex. At least, the majority.

During the start of it, Mobian thought it would've been a good idea to keep the "good" guys - the Deadly Six - for last, and focus on the weaker creatures first. They ended up beating Zovia in a fight, and gave her two options: Die or be a slave. Of course, Zovia chose to being a slave, because she would rather not die. For a few months - that seemed more like years -, Zovia served under Mobian, who was very cruel towards her, and stood quiet for the entire time.

However, Mobian's moments of victory were near the end. Zovia, confident and sure about making Mobian "eat the dust and kick the bucket", was able, along with many others, to finally defeat Mobian and put an end to its destruction of Lost Hex. Ironically, despite everything that happened, to Zovia it was as if NOTHING had happened - she knew from the start that it wasn't her who was doomed; it was Mobian.

After that, Zovia just decided to live her life as she always did, stealing things, eating sweets, and annoying others...

Zovia did not have a good relationship with Mobian. She was constantly depreciated, insulted, and overall abused (though minor) by Mobian when she was kept as a slave.

Mobian was unaware of Zovia's ability to lie better than anyone, and as such, thought that Zovia was indeed staying with them forever. However, it was all just a way for Zovia to get her plan to work; through being able to get Mobian to trust her as a "sidekick forever", she was able to put an end to Mobian's reign of terror. She felt no guilt once Mobian's final moments were close, and happily watched everything end.

Overall, Zovia has a certain dislike for Mobian, but does not hate them; she actually thanks them for helping her create one of the "greatest plans of her life", but still wishes they "have fun in a place beyond Hell".

Retrieved from "https://sonicfanon.fandom.com/wiki/Zovia_the_Zeti?oldid=1768027"
Community content is available under CC-BY-SA unless otherwise noted.