You may be looking for Zircon the Jerboa.

"I can arrange you a cosmic journey. Just trust me, you'll be okay!" -Zircon 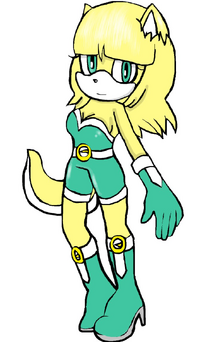 Zircon is light yellow cat, who wears a pure green attire, which includes green dress, green shoes and green gloves. She has small tail and blue eyes (The picture doesn't include these details) and also long hair.

Zircon has also alternate costume, which includes black shirt and black shorts. She also has rings on her feet. There are yellow signs in the attire

Zircon is shy and curious about everything in the Mobius. She has cheery attitude and is ready to learn everything needed. She is sweet lover, who mostly follows and does something, when said.

Zircon has powers to summon Strato stars-called little stars to either attack to enemy or protect Zircon herself. She gets more power from the moonlight. Zircon can also levitate and she can even summon meteors in need.

Zircon is quite a special woman, since she has unique gloves which allows her to use arrows made of titanium. Zircon also can use elemental busters, which lets her use different kind of elemental weapons.

Zircon borned on Stargala planet, which is known as a planet where all pure women comes from.

Zircon spent her childhood with Strato-stars, which are cheerful little stars, who can sense human's feelings and read their factions. She, stars and others lives in peace and harmony. One day, when Zircon was 19, Stargala planet was attacked byRockumlus-planet's soldiers, who came to steal Smaragd-gems to their own purposes. The stargala-planet was supposed to teleport far away from Rockumlus-planet with the power of Smaragd-gems. The citizens of Stargala decided to move to another galaxy from their neighbors and made a wormhole. When the women were moving, few of the Strato stars were playing elsewhere with Zircon. They just saw when the wormhole closed and realized they were left. Zircon and stars were left to empty space. Strato-stars tried to create own wormhole to transport Zircon and themselves to Stargala's new location, but they ended up to real world instead.

The army of Rockumlus later found out that Stargala's citizens has moved away along with smaragadas, which they usually stole from there to give power to their light bulb. The light bulb is big enough to produce light to whole planet, because light makes citizens of Rockumlus much more evil. Drake force's leader, Drake however decided that they are gonna steal electricity from real world instead.

When the army got to real world, one of the spies gave a shocking news: A citizen of Stargala has been seen in the real world. Drake thought that Stargala has predicted that he will steal electricity elsewhere and sent women to real world stop it. Drake then sent soldiers to eliminate Zircon.

Zircon's interactions to Strato-stars can be compared to Rosalina from Super Mario galaxy. 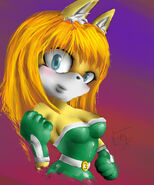 Zircon the Cat made by Negdanchik at DeviantArt

Picture made by Nitrogen218 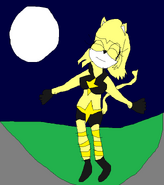 New version of Zircon's moon form
Add a photo to this gallery
Retrieved from "https://sonicfanon.fandom.com/wiki/Zircon_the_Cat?oldid=1800737"
Community content is available under CC-BY-SA unless otherwise noted.