Zeta the Echidna is a 19 year old echidna-alien "hybrid" who works as a freelance assassin. 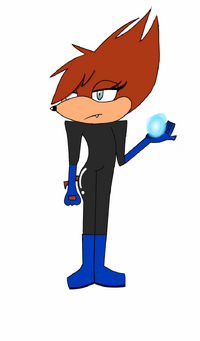 Zeta is a female, auburn furred echidna with blue-grey eyes and a tan peach muzzle. She is quite tall for a Mobian due to her unusually long legs. Zeta is of average weight for her height. Her chest is rather flat, which causes some occasional teasing from others; Zeta largely ignores the teasing, however. She has bangs that partially cover her right eye, and her quills are swept upwards. Despite being infused with alien DNA, she has no physical alien traits.

Zeta is an aloof, stoic, and typically quiet echidna. She remains calm in almost all situations, or at least tries to. Devoid of many emotions, she comes off as robotic to most people, sans those who know her personally. Zeta shows no remorse towards those that she resents, and has no problem killing for petty reasons, either. She despises the aliens who abducted her and infused her with their DNA. She would never embrace her powers, either. Despite her general demeanor and some of the actions she takes, Zeta is not a villain, nor is she a hero; she is best described as a Chaotic Neutral character. Zeta acts coldly towards most strangers, but shows a much more affectionate attitude towards her father, her friends, and her girlfriend.

Throughout her whole life, Zeta was always a reserved individual. She didn't have many friends, though this did not bother her. The only person she was ever particularly close to was her father, who she admired greatly and looked up to. Zeta's father was an astrologist who was fascinated with extraterrestrial life; he would spend hours researching the potential existence of life outside of Earth. Though Zeta never shared her father's beliefs for many years, her opinion changed when she was 11 years old.

On a cool, late spring night, Zeta's father observed a strange light in the sky. He almost immediately jumped to the conclusion that this light was being emitted from a spacecraft, though Zeta scoffed at his idea. The light started to approach the father and daughter, and it soon became clear that her father was right about it coming from a spacecraft. The ship landed onto the ground. The doors of the spacecraft opened, and out of it walked four aliens with grey skin, huge black eyes, small noses, and slits where their ears would be. One of the aliens forcefully grabbed Zeta and her father, taking the two into their ship.

The Greys, as they were nicknamed, performed various experiments on the father and daughter without consent. Some of these were quite painful and left Zeta traumatized for months. One of these experiments, in particular, involved the aliens injecting their species' DNA into Zeta. Hours later, Zeta and her father were released. For approximately three days, Zeta was unable to use her newfound powers as a result of the experiments, nor was she aware of them. Four days after her abduction, however, she accidentally conjured a blue beam of energy. Startled by this, she flung it into the ground.

Nothing interesting of note happened during Zeta's middle school years until she was 14, when she became aware of her telepathic powers. She soon became aware of its concequences, though; whenever she would read another's thoughts, she would get headaches.

Zeta also met her future girlfriend in the 8th grade, Jade the Dragon. While they had a rocky start, they soon befriended each other.

Zeta started her career as an assassin at the age of 18. (TBC)

Due to her alien DNA, Zeta is able to conjure small blue beams of energy from the palms of her hands, using them as a method of attack. Another power stemming from her alien DNA is her telepathy. With it, she can read the mind of those she knows, but is unable to communicate telepathically.

She is able to glide through the air like many echidnas, though for a shorter period of time, due to her shorter quills. Zeta is also a very agile person.

Overusage of her powers cause Zeta to become very fatigued, and can even potentially result in her death. Her telepathy, in particular, causes minor headaches, even when it is used for a short period.

Jade is Zeta's current girlfriend. Despite the two having opposing viewpoints and personalities, Zeta considers Jade to be a lover and a friend.

One of the few people that she is close to, Zeta genuinely loves her father.

Zeta, as drawn by me.

Notebook sketch of Zeta in a slightly different art style, drawn by me.
Add a photo to this gallery
Retrieved from "https://sonicfanon.fandom.com/wiki/Zeta_the_Echidna?oldid=1862066"
Community content is available under CC-BY-SA unless otherwise noted.