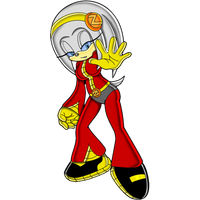 Zeta R-02 (ゼータR-02) (Zēta R - 02) was created by Neoeclipse being part of his fan fic Called "Project R". Later was a new mascot of MetroVG instead of Chip-chan.

When Neoeclipse knew Vannessa (known at that time as the nickname of Amy Rose) and became friends Zeta was gifted to her being then the new owner of Zeta and being know as Zeta R-02 since then she use hers as a persona online.

Zeta R-02 appears as a white female echidna dressed in a form-fitting red and black bodysuit which flares at the ankles and wrists, and black boots. Their hands, along with the trim on her suit and boots, is gold in color. On her head is a gold-colored headset capable of producing an antenna, visor, and other useful gadgets.

Zeta R-02 is a gynoid (the term for a female android), and her robotic nature is evident by numerous visible articulation seams on her body, as well as her ability to produce powerful electrical blasts or extend blades from her wrists.

Zeta R-02 seems to have the least trouble with the cloud's effects, likely due to her artificial nature. Her animations and dialog all seem to indicate that she's able to retain logical thought, though if she's not selected as a playable character, she's shown in the opening scene to be just as susceptible as the rest of the team.

-Ion Cannon: She releases her hand from her arm and shot a powerfull ion beam, is one of her more effective attacks.

-Piston Punch: She shots her Ion Cannon inside her arm (with her hand put on) moving like a piston generating a extra powerful punch.

-Plasma ball: She shots an energy ball using her arm cannon, similar to her Ion Cannon.

-Rocket Shoes:This allows her fly using the rockets that are placed in her shoes.

-Rocket Punch: this move allows her launch her punch to attcack the enemies to distance (This move isn't showed in Project X).