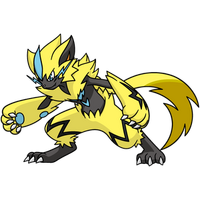 Zero the Zeraora is a Zeraora who appears in The Legend of Fox the Brave. Like Swift the Silvally and Silvally (character) before it, Zero is genderless, but referred to as male, and speaks with a male voice. His original debut story was scrapped, leaving him to make his first official debut in Resistance Rising. As of the newly overhauled lore of The Legend of Fox the Brave, Zero meets the warriors much earlier than originally intended, meeting a patrol sent out to rescue a kidnapped Dallas Smith.

Zero is a bipedal Pokemon with black skin on his face, ears, torso, upper arms, and lower legs. He has thick yellow fur over most of his head, his forearms and hands, chest, and his hips and upper legs, with a trail of fur dangling from his back. He has cyan highlights, whiskers, and pads. Finally, Zero has cyan eyes, zigzagging black stripes on his arms and legs, and four fingers and three toes, each with an extended claw.

When the warriors first meet Zero, he is a morose, solitary person, but understands a quest to rescue a kidnapped child, and thus accompanies them in pursuit of the Destructix, who had kidnapped young Dallas Smith. He helps them out, and chooses to stay, deciding he liked fighting as a warrior.

Zero was shown to be a lone traveler when the warriors meet him. He initially blows them off when they ask for his help, but when Austin asserts that they were trying to rescue his son, and when he sees Boulder the Lycanroc among the patrol, he agrees to help, saying he's got nothing better to do with his time. He helps rescue Dallas and later Austin from Starline, who is curious about the warriors, and decides to stay with them afterward. Zero accompanies them back to the Storming Base, becoming a warrior when the patrol returns.

Zero is incredibly physically fit and acrobatic. He is also very fast since Zeraora can move as fast as a lightning strike(as stated on the Pokemon Wikia).

Additionally, Zero cannot produce electricity himself, and must instead rely on other Electric-Types to give it to him, so he can store it within his body. If he runs out, he must find another Electric-Type to help him recharge.

He has a voice similar to that of famous American actor Danny DeVito, who appeared in Disney's Hercules and the FX series It's Always Sunny in Philadelphia among other roles.

Zero is the first Mythical Pokemon to join the Storm Fighters, and the second Genderless Pokemon.

Retrieved from "https://sonicfanon.fandom.com/wiki/Zero_the_Zeraora?oldid=1841824"
Community content is available under CC-BY-SA unless otherwise noted.