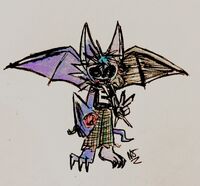 Zeleo is a decaying purple hedgehog-bat hybrid with turquoise skin. He has a messy turquoise tuft of hair on his forehead and graying black hair on the left side of his head beginning from under his ear. His ears are large and bat-like, however his snout and nose are that of a hedgehog's. The right side of his face, including his right ear, is covered in violet fungus, causing his hair to harden into indigo spikes with white tips, which also cover the back of his head. Zeleo has a pink right fang, while his left teeth are sharp and yellow.

Zeleo's general personality is unpredictable to say the least. At one moment, he could be playful and wacky, and the next second, silent and daydreaming. He has a "zombie" side that occasionally takes over, which causes him to act very rigid and animalistic. Zeleo has frequent hallucinations and flashbacks, and sometimes even visions of the future, which all confuse him and his grip on reality. There are times Zeleo's friends aren't even sure if he's joking or not about what he sees. He's also afraid of the Violet infecting his body, because there could be a chance that he'll accidentally hurt his friends under his influence, not mentioning his own demons he has to deal with.

After being killed by Xiro in the Battle of Paris, Zeleo was infected by a beta strand of the Violet fungus and was resurrected, with an instinctual vendetta against Xiro. He then flew after the aircraft transporting the Mini-Militia and stowed away there after he caught up to it.

Halfway there on the trip to the United States, Zeleo had already forgotten about his killer, and right before the helicopter arrived at the Fort Oregon, North Carolina, Zeleo believed it was going to explode and jumped off. He soared far away from the aircraft until he landed in a forest in Raleigh, where he then fed on the residing wildlife.

While he was there, he accidentally converted a large portion of the forest into violet. The incident wasn't heard of until an witness reported seeing a purple area while flying her camera drone. Police and scientists were sent to investigate, but they had to flee when the violet-infected animals and plants attacked them. The next day, the E-Squad, currently consisting of just Coldsteel, James, and Sam at the time, came across the violet territory while traveling through the forest, and Coldsteel decided to enter since he heard Zeleo's voice.

After battling his way the undead creatures, Coldsteel finally found Zeleo sitting in a patch of violet roses. Coldsteel told Zeleo that he should do something more fun, to which Zeleo agreed, and they both left the forest safely, due to the fact that Zeleo had control over the fungus. After meeting James and Sam, Zeleo convinced them all to help him burn down the violet-infested forest, thus ending the fungus's control over that area.

Zeleo inherited clairvoyance, the power to see into the future, from his parents, due to the purple chaos emerald's effects being in his bloodline. Unfortunately, even though he has the strongest vision in the family, his comprehension of his visions is severely hindered by his mental illness, or by the violet fungus, which purposefully manipulates his dreams for its own goal. Zeleo is only able to fully use his gift if the violet "allows" him to or if he fights hard enough.

On the subject of the violet fungus, it grants Zeleo the power of telepathy and allows him to utilize the violet on his body for combat and predatory purposes, including extending spikes and claws from the infected regions.

Along with clairvoyance, he possesses the typical abilities of both hedgehogs and bats- mainly the natural immunity to most poisons, a heightened sense of smell and sound, and the ability to fly with his wings.

Zeleo is fairly good at hand to hand combat and using his dagger, but his true skill is in music. He often writes poems, and practiced playing the piano for years, and even when he was incarcerated, he'd devote himself to "playing" a drawing of piano keys on the wall.

Zeleo can regenerate his infected body parts, but he requires his brain to live. He can also be deactivated by electromagnetic pulses or bolts, and his infected body's tissue is hardened enough to shatter from heavy impact.

An old watercolor portrait of Zeleo.

Zeleo depicted holding both his rose and dagger. 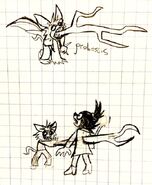 Zeleo using his proboscis and dark spear (interactions depicted are not canon). 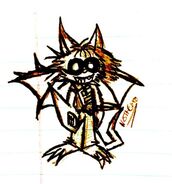 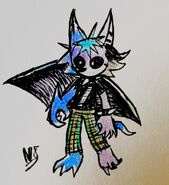 Former header image.
Add a photo to this gallery
Retrieved from "https://sonicfanon.fandom.com/wiki/Zeleo_the_Dark?oldid=1867821"
Community content is available under CC-BY-SA unless otherwise noted.