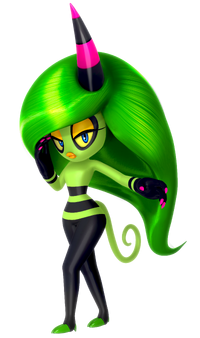 Zeena (ジーナ, Jīna?) is an antagonist in the Sonic the Hedgehog series. She is a Zeti and the only female member of the Deadly Six. When Dr. Eggman came to the Lost Hex, Zeena and the other members of the Deadly Six were forced into serving the doctor due to the effects of the Cacophonic Conch. After Sonic the Hedgehog arrived and got rid of the conch, Zeena and the others rebelled against Eggman and took control of his forces. Afterwards, Zeena followed Zavok's plans to make her and the other Deadly Six stronger by using Eggman's Extractor, while destroying Earth, but was ultimately defeated by Sonic.

Zeena is a green female Zeti, with a slender upper body that curves out into fairly wide hips. Zeena's upper body is lime green with two black stripes around her waist, while the lower half of her body is black. Zeena's small feet are tipped by small lime green claws, with a third smaller one on each heel. Zeena's tail is thin and curly, ending in a chameleon-like swirl (similar to Espio's tail). Her wrists have black stripes around them while her five-fingered hands are black, each digit tipped by a hot pink nail.

Zeena has long green hair that parts to the right, extending down to her lower legs. On the left side of her head Zeena has a single curved horn with an alternating black and hot pink coloration. Her circular eyes are surrounded by black rings, while her eyes are blue with yellow sclera and yellow-orange eyelids, and her lips are orange.

Many years prior to Sonic Lost World, Zeena was brought into the Deadly Six when Master Zik formed the group.

In Sonic Lost World, Zeena and the Deadly Six met Dr. Eggman, who used a Cacophonic Conch to enslave them. Begrudgingly, Zeena forcefully helped Eggman's scheme for world domination by capturing Animals for an army of Badniks. Eventually, Zeena joined Eggman and the Deadly Six for a Badnik-making lesson where Eggman told how they would help him beat Sonic the Hedgehog, before she saw Zazz leave to fight Sonic.

While in Windy Hill, Zeena and her team encountered Sonic, before joining Eggman as he left Zazz to finish Sonic. Resuming the Animal hunt, Zeena got punished by Eggman with the Cacophonic Conch when Zavok spoke against Eggman's criticism of their work. Not long after, Zeena and the Deadly Six were scolded for their failures by Eggman with the Cacophonic Conch again when Sonic showed up and knock the conch away. Now free, Zeena and her team took control of Eggman's Badniks and had them attack everyone at the site, driving Eggman, Orbot, Cubot, Sonic and Tails off.

Now free, the Deadly Six took control of Eggman's operations on the Lost Hex, and Zeena went along with Zavok's plan to destroy the Earth with Eggman's Extractor and use the energies it harvested to make the Deadly Six stronger, thus getting their revenge at Eggman. While Sonic kept opposing the Deadly Six, Zeena opted to chill out until Zavok persuaded to deal with him. Getting a beating from Sonic, Zeena soon met him again who taunted her with her nail art fixation, prompting her to engage Sonic again, only to lose. Zeena later helped set a trap to capture Sonic so the Deadly Six could turn him into their robotic slave, only to find Tails caught in it when it returned. As Zor then arrived to announce the failed capture of Sonic, Zeena scowled in response.

Later on, Zeena confronted Sonic with Zavok and Zor, where they showed him a seemingly roboticized Tails, whom was ordered to kill Sonic when he refused to serve them. However, Zeena was forced to retreat when Tails attacked them, having only pretended to be roboticized. Zeena soon faced Sonic in combat, but was defeated for good despite her Extractor-enhanced strength. What happened to Zeena afterwards is unclear.

Zeena is a feisty,[1] cold-hearted, and cruel person who lacks initiative. She is very selfish and indifferent,[2] preferring to look after herself by treating herself with free time despite the issues at hand, but she is not very likely to look after anyone else.[1] Despite this, she can be persuaded when she receives compliments about her attributes, such as when she agreed to fight Sonic after Zavok complemented her speed, smarts and looks.[3] Regardless of her lack of dedication though, Zeena is very serious and will accomplish the tasks given to her.[2]

Zeena is very vain regarding her appearance. She frequently takes care of her looks and is very protective of it, especially her nail art, and having it ruined infuriates her. She is also very fashion-savvy, and will not hesitate to criticize others for their fashion sense. She also appears somewhat flirtatious in both speech patterns and body language. Despite showing a lady-like composure most of the time though, Zeena has a terrifying temper and is not shy about showing it.[1]

Like the other members of the Deadly Six, Zeena is inherently malicious, sadistic and violent. An omnicidal monster, she enjoys inflicting pain, torturing and killing others, and has no problem causing global genocide for her own gain. Also, when Sonic was horrified and angered by seeing Tails turned into a robot, Zeena further taunted him for her own amusement. She is also rather vengeful, given that once Zeena was freed from Eggman's enslavement, she launched an attack on the scientist. Similarly, when Sonic insulted her, she wanted to punish him severely.

Zeena has high physical strength, enough to let her swing to two metal balls larger than herself around at astonishing speeds with each arm. As her unique skill, Zeena is capable of producing green energy cords from her hands that she uses in combat like whips and to latch onto objects-even ones much larger than her-and using them to strike. She also has incredible jumping skill, allowing her to leap high into the air and across very large distances in an instant. In the Nintendo 3DS version of Sonic Lost World, Zeena is also shown being capable of flight.

As a Zeti, Zeena possesses the innate ability to manipulate magnetic fields, which enables her to control electronics. This allows Zeena to take control of robots and other kinds of machinery.

Like all other Zeti, Zeena's powers are greatly inhibited when the Cacophonic Conch is blown, which causes her great pain.

Retrieved from "https://sonicfanon.fandom.com/wiki/Zeena?oldid=1878344"
Community content is available under CC-BY-SA unless otherwise noted.