Start a Wiki
This character is a recolor. Please consider drawing some of your own art, or removing the recolored images.
Zarex 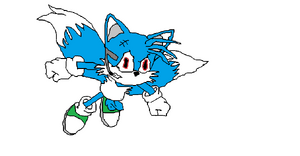 Zarex is a 14 years old fox that likes adventures and always helps people when they need it.

Zarex is a 14 year old anthropomorphic fox . He has light blue fur. He wears green and white shoes. He has orange eyes. He can also be seen using sunglasses (he uses them most in parties).

He also often uses white shoes with a yellow strip.

Very little is known about Zarex past. When he was four his parents had an unknown accident and they died. He then was adopted by a rabbit family. Zarex did go to school after the accident, however he left it soon and started to train to become a hero and avenge his parents. In that time, he temporaly lived in the abandoned house from his grandma, that wanted to sell the house.

Zarex likes to go into problems and adventures. He is ready to defeat any villain that comes in his way. Sometimes he is timid and doesnt likes to fight. But if neccesary he can become very angry.

He likes to help people when they need it and will protect his friend even with his own life.

(I dont plan to make a Super transformation for now, i will wait a few RPs first)

Zarex in his "awesome" kid form.

New Design of Zarex The Fox. Also first Sonic character draw by me!
Add a photo to this gallery
Retrieved from "https://sonicfanon.fandom.com/wiki/Zarex_The_Fox?oldid=1845373"
Community content is available under CC-BY-SA unless otherwise noted.