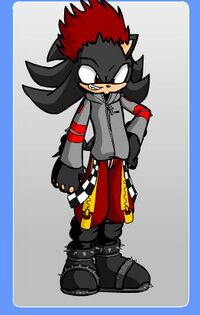 Endless Struggle by Throw the Fight

Zant was created on the Space Colony ARK by Professor Gerald. After Professor Gerald's success with Shadow the Hedgehog, the government had forced him to create more beings like Shadow. Together, with a team of scientists, Professor Gerald went to work to create another being like Shadow, but failed to do so. He worked with a clone of a Mobian Hedgehog, and attempted to give him the same powers as Shadow, but the being could not contain the Chaos Energy. So, instead of creating a being with the same powers as Shadow, Gerald took a failed project from Soleanna, which was a mass of spectrakinetic energy given life, and converted it into a symbiote.

The symbiote bonded with the clone's body, and gave the body life. Unfortunately, the creature went on a rampage, calling itself Mephiles. Shadow the Hedgehog had to use Chaos Control to seal it inside of a capsule that kept it trapped frozen in space/time. GUN, blaming Gerald and the other scientists for the failure, began to eliminate the survivors, to keep people from talking, including Gerald's daughter Maria. They placed Shadow in a stasis pod and took him to Prison Island. They shut down the ARK under the premise that there had been an accident. Gerald, grief stricken,went insane, and preprogrammed the prototype of the Ultimate Life Form (known as the Biolizard) to take control of the ARK's systems and ram it into earth. Gerald was eventually executed.

Zant's pod was kept on the ARK, unknown to anyone. Shortly after Sonic the Hedgehog and Shadow the Hedgehog had kept the ARK from crashing into the planet 50 years later, Zant's pod had ejected from the colony, and landed on Mobius. Upon landing, with the seal cracked, Zant awoke, with no memory at all, inside of the pod. He kicks open the pod door and steps out to find he's in some kind of forest. He begins to wander through the forest aimlessly. Suddenly, he's attacked by a mysterious stranger. The stranger introduced herself as Dante Nantal and she accused him of being a member of something known as The Order of the Phoenix. Zant denied this, but the stranger didn't believe him until they were attacked by two members of the Order of the Phoenix, Ragdoll the Fox and Detonator the Weasel.

Ragdoll nearly kills Zant before he is able to escape. He teleports to where Dante is, who is pinned by Detonator. Zant teleports Dante out of the area before Detonator's explosives break through her shield.

After escaping the two take a breather. Dante explains who their enemies were, and says that they kidnapped close friends of hers. Zant offers her his partnership and Dante accepts. Suddenly, the two notice a flock of Detonator's explosive birds flying towards the Tornado, which was transporting Sonic the Hedgehog, Miles "Tails" Prower, Sally Acorn, and Amy Rose to the Dragon Kingdom. The birds bring the plane down, and it crash lands nearby. Zant offers to teleport towards the crash site to see if they are okay, but they are attacked by Ragdoll and a newcomer, Sparx the Hawk.

Sparx critically injures Dante. The already exhausted Zant attempts to help her, but is stopped by Ragdoll and Sparx, who nearly kill him, when suddenly, Zant begins to glow purple and shoots them both with blasts of darkness. After the two are blown away, a cloaked figure walks over to offer Zant assistance, but Zant passes out before he could learn the stranger's identity.

The Order of the Celestites

Zant later recovers, and forms an alliance with Sonic, Tails, Amy, Monkey Khan, and Jewel. Together, they all discuss their future plans.

Jewel has to take Sonic and Zant to the isle where the Order of the Celestites resides so that they can train to battle the Order of the Phoenix. Jewel takes them there on a dragon made out of her crystal powers.

When they arrive, they are given a rather harsh introduction by Spiral the Cat, who demonstrates his powers of illusions by nearly killing them. Following that, he brings to two into the Order of the Celestites' training dome, and orders the two to enter separate rooms where their training will take place.

Zant passes out upon entering his room. When he wakes, he is in a room with a mirror locked up inside of a cage. When Zant looks into a cage, he sees some kind of creature shaped like him. The creautre says that his name is Mephiles, and tells him that if he ever needs to borrow his power, all he has to do is ask. Zant then sees a bright light and passes out again.

This time when he wakes up, he's in a bare room. He wonders if it was all just a dream. Then, a grey wolf who introduces himself as Wendu enters the room, and instructs Zant that he will train him in his powers and that he is to begin training immediately.

Zant's personality is a little similar to Shadow's, but Zant tends to be a bit more light hearted. Zant likes to taunt his enemies, and greatly cares for all of his friends. He will tend to worry about anyone who is injured on his team. Zant can't remember anything about his past, which annoys him, and he swears to figure it out one day.

Sonic the Hedgehog: The Mobius Wars- written by me 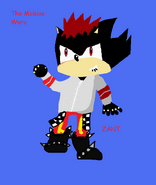 Add a photo to this gallery
Retrieved from "https://sonicfanon.fandom.com/wiki/Zant_the_Hedgehog?oldid=1820052"
Community content is available under CC-BY-SA unless otherwise noted.