— Yukon, when he is planning an attack to Mobius

Yukon is the main antagonist of Hero of Mobius

Yukon has big blue diamond in his forehead, and sludge green armor. It's unknown, what is behind Yukon's helmet. He appears to have red eyes.

Yukon has golden shoulders and yellow cape. The middle of the stomach has circle with two red circles. It includes various weapons for combat. Yukon has black hands and sludge green gloves with spiky top. Yukon has a black belt and robot-like feet. The feet has sludge green feet with golden parts and blue shoe.

Yukon has double higher IQ than Eggman, so he is super genius robot. He is mainly evil and really mysterious and he has magic aura. Although he has a high IQ, his plans are foiled by Sonic. The chip which gives the IQ has also several flaws causing Yukon to make some mistakes.

Yukon can be sometimes also scrooge person due to fact, that Eggman left his ability to make crystals and earn money with them. That explains  his financing to really rare weapons and parts used in the robots he and Eggman does.

Yukon tries to avoid close combat, but still has ability to protect himself with his magic aura. He uses his build vehichles, such as Yukonizer (at picture), which shares same outlook as Death egg robot. He is seen using mostly vehicles rather than fists or buster.

Yukon has his best henchmen, perish the skeleton as helper. He also uses Eggman and other evil Sonic characters as minions with robot masters. Yukon shares some similarities to Eggman being smart and making robots too.

Crystal Man woke up and with super-high IQ he stopped Eggman and took his place as a robot emperor. He awaken the destroyed robot masters with the help of his new assistant, Perish the skeleton .

Crystal Man didn't liked his name, so he erased that name from his mind and now he calls himself as Yukon. He also redesigned himself to look less fishy.

And this is how Yukon borned.

Attack: 5- Yukon isn't strong fighter, since he tries to evade close combat. But if he really have to fight, he uses his crystal missiles, which he can throw and starts automatically home into victim

Defense: 7- Yukon is good to defense himself. He can spawn two red balls, which are spinning so fast that they create a barrier around Yukon.

Speed: 6- Yukon is average fast robot. He can get some boost by jumping to a long distance.

Magic: 9- Yukon can use Magic aura, which has a magnet effect. The effect absorbs especially chaos energy, which can turn Yukon into his super form without using Chaos emeralds.

Evasion: 4- Yukon's evasion is high only when jumping. At ground he trusts too much to his defending system.

Intelligence: 9- Yukon is twice smarter than Eggman, so he knows pretty much about almost everything. But his chip still has some glitches.

Skills: 7- Yukon has skillful jumps and attacks. His combat is weak, though.

Accuracy: 9- Yukon's crystal missiles are almost impossible to dodge. And if the defensive balls are shot, they can attack into shooter.

Stamina: 8- Yukon doesn't get tired easily, so he has enthusiasm to try.

Tolerance: 9- Yukon loves to fight and enjoys always although he may lose. He takes massive amount of damage

Hero of mobius the game and roleplay

Crossovers of hero of mobius

Yukon have re-modeled DR Wily's castles as Yukon's own private usage along with wily bosses.

He also have gathered the most fiendish group of enemies to destroy Sonic once and for all.

The red crystal in the top is the place where Yukon controls his robot. It works also as an escape capsule.

Left shoulder represents wind. it can either power up left hand or spawn tornados from the top of the shoulder and make them as one big tornado.

Left hand represents strenght and earth. It's a one big boxing glove, which can break the thoughest material. With the power of wind spawning shoulder, the punch can give a boost for opponent and make it fly far.

Right shoulder represents electricity. It can either power up the right hand or give electric shocks for victim. It's recommended to stay away from the shoulder, because it's always active and it sparks.

Right hand represents metal and has a blade as a hand. Since metal is conductive, the blade in the hand becomes more effective, when it gets power from shoulder.

The belly delivers the needed power and energy to each body part in the yukonizer and is the weak spot. Since this, it's protected with a diamond shield and is almost impossible to be destroyed.

The left knee represents water. It can either power up left foot or spawn tidal waves. It can also make water beams.

The left foot represents ice. It can freeze ground and is made from Yukionium. With the left knee's power, the foot can cause ice and tidal waves with every step or stomp.

Right knee represents time and space. It can either power up the right foot or shoot beams which can either stop victim or slow it down.

Right foot represents fire and is made of Talosium. It can make fire waves and with the power of the knee, it can also make them super fast. 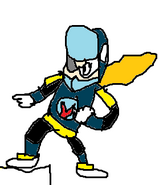 Yukon's third design designed by Boberatu and drawn by Megaphantaze

Yukon's sprite sheet made by Boberatu on Deviantart

Yukon's sentinel. It can be turned into a fighting robot.

Yukon's creation history
Add a photo to this gallery

Retrieved from "https://sonicfanon.fandom.com/wiki/Yukon_the_robot_emperor?oldid=1560718"
Community content is available under CC-BY-SA unless otherwise noted.