Yuki the Hedgehog is a fan character created by GalaxyWorld27 (Known as sonicgalaxy27 on YouTube) Yuki is a female protagonists in the Disco series.

I will do everything i can to help my friends. Any foe i face will meet their fate and face justice. 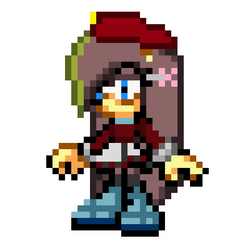 Helping Those As Needed.

Seeing Her Friends In Danger.

Turn In To Stone.

When people thinks she is deadly and dangerous.

Yuki is a Hedgehog who has bangs on her forehead and has brown hair with green streaks on it in her bangs. She also has long brown hair behind her, and she wears a hair pin on her hair that is shape like a pink flower. She also wears a dark red beret on her head and has a gold cross in the middle.

Yuki does not appear to be any less foolish than a typical being in the physical form. She is well known as a polite, caring, calm, and truthful person who is always there for her friends and the innocents when they are needed and when they are in danger in other situations.

Yuki is always serious about any mission she is taken and not taking jokes as one of her friends described, not losing her temper or go for a fit of rage. She cares deeply about her friends very much and she is sometimes worried that one of them may not make it out alive. She recently have some courage to stop evil at all cause who threading to destroy planet earth and she will do anything to put a stop to it with the help of her friends. However, she is revealed to be rather intelligent, as she was in any being.

Yuki doesn't smile a lot on any events like ceremonies, but she sometimes smiles on some events and occasions recently. She is always calm and never insults her enemies and foes during battle witch she mostly keeps her emotions in check 24/7.

However, Yuki always follows orders and complete her mission for her desire to take down her targets and any being she battle without any form of hesitation.

Yuki is shown to have a funnier and less mature side in her like some characters do. She enjoys special fun activities in life like volleyball, tennis, basketball and exercise, but in a very humble manner.

After being saved by Zax the Firehog when she sprained her ankle during a giant goblin battle and failed to move, She falls deeply in love with him and thanks Zax for saving her and later becoming one of his most loyal followers.

During her time in her dimension, Yuki was created by her father in the castle. in 2 years later, Yuki became a mercenary and require a army of soldiers from the king and orders her army to slay demons and monsters from hurting the innocents without hesitation. Yuki and her army trying to protect innocent people from danger where ever something appears in town.

Later in 3 years, war in town is approaching for everyone. However, a mysterious black demon appear in town and try to wipe out all of humanity by destroying every last person in her world. Yuki's father step outside and he notice that the black demon is much powerful and it has the power to destroy one planet. Later on Jacob try to stop the black demon for killing everyone but he has no chance against it. So, he has a choice but to make a sacrifice to put a stop to it for causing alot of destruction. He will used the a powerful device to destroy Yuki's world by destroying that powerful black demon along with it However, Yuki shows up and saw her father fighting that black demon and risking his life to save her. So, he creates a portal to another dimension that Yuki will go too. Yuki refuse her father to go in there and can't leave with him. Jacob later push her in to another dimension and he set off a bomb that will destroy everything.

Later on, Yuki end up in Disco dimension and she felt really sad about what happen to her father when he risk his life to save her from the demon. Yuki notice that her life is started to end up bad without her father or friends around in her dimension even so she been really sad that she blame herself for not helping her father defeating a powerful black demon that appears in town. Later on in Disco's dimension, Yuki put herself in to hibernation in the pod for 98 years and makes her falls a sleep and healing her body from any damages.

Yuki and Zax had a good friendship together when it comes to hanging out with each other and help each other. However, it has been revealed that Zax has a crush on Yuki.

Yuki has a good friendship with Disco despite them hanging out with each other, they both fight alongside together and they get a along very well.

Yuki and Azmaria get along very well and Yuki can protect Azmaria no matter.

Yuki has team up with the organization team called Team Nebula in order to fight against the eggman empire and the deadly six.

After she was killed by Shio who stab her in the back and destroyed her core in her chest, Zax vow on that day that he will get revenge on Shio who killed yuki and he swear on his life. After Disco and his friends won the war against Phantom and his gangs 3 weeks ago, Zax asked Disco for his help to bring Yuki back to life. However, Zax and Disco found away to bring her back by calling out Angel the Hedgehog, the keeper of Astro Emerald in Skyworld. Angel help her friends and used the Astro Emerald power to contact her brother, Haku the wish maker hedgehog and asked him to bring Yuki back to life and later he agrees and something unexpected came up with the wish. When Angel make the wish, The world went to all white background. After the world went to all white when Angel made the wish, Zax was brought in to a unknown island witch is full with some harmless animals and sea creatures. Zax look around the half of the island so he find out where he's at in the unknown island by finding someone. He later pick up something in the island and he notice it was Yuki who is sleeping in the grass surrounded by flowers while she is in a white dress outfit.

Despite her history of completing her mission, Yuki can fight with supernatural abilities that she used in any battle. These abilities consist of two types of blades, which she can have one, and only one, type of on her at a time.

When during battle, Yuki has a core in her chest that keeps her alive before her creation by her father, if an opponent targets her core and destroys it, She will die if the core is destroyed. However, its quite possible that the core could be repaired and revive Yuki.

Yuki can only stay in her angel form for 25 minutes and she won't used it again in 7 hours and will be left wide open. However, in her super state, her wings will get wet in the water and won't have the ability to take flight again in a minute. If she loses one of her wings, she won't be able to fly in that state which will make it hard for her to fight back in that state.

Yuki will also lose her angel state very quickly if she uses too much of her powers and a maximum amounts of energy in her body.

"Your attacks are not very effective against me, time to meet your fate."
— When she about to take the final blow.

"I hope we can be friends and fight along side together."
— She is about to make some friends.
"Playing the piano is a good talent for me. "
—She tells her friends that she likes playing the piano.
"That doesn't work on me. That attack is useless."
—When Yuki is about to fight a random foe.
"I got you."
—When she tries to grab a few fish in the river with no boots and socks on.
"I clean everything and cook dinner a lot. I was a maid before."
—Zax tell her about how she cooks and cleans everything well.
"Sorry Zax but i have to clean the pool."
—When she is about to begin cleaning the pool barefoot.
"Looks like i'm stuck"
—She gets stuck in a sticky giant bubblegum from her foes.
"Its ok Azmaria, i'll just go and take a bath and change in some clothes."
—Yuki tells Azmaria she is going to change in some clothes after Azmaria accidentally spill some apple juice and spaghetti all over her and her clothes.
"You can't escape from me, there is a chance that i could defeat you."
—When Yuki faces a foe in the forest during Thursday night.
"I'm really having a good time tonight Zax"
—She is hanging out with Zax at the movies.
"Thank you for the Hand-Sonic. I will used it well and protect the innocents from any evil beings."
—She got the Hand Sonic from the temple.
"I think i'll go to bed now."
—She is about to go to bed.
"I can't move. Hey, let go of me. "
—She was being restrained by one of Eggman's inventions.
"I made some cookies if anyone want some."
—She bake some cookies for everyone.
"Ow ow ow that hurts."
—She got clawed by a crab on her second toe while she was watching the view on the beach.
"Yeah, I don't like crabs Zax but I got crawled by them sometimes when i'm out here with you guys. Sometimes, they always crawled one of my toes and fingers for some reason."
—She is telling Zax that she got crawled by some crabs sometimes.

Retrieved from "https://sonicfanon.fandom.com/wiki/Yuki_The_Hedgehog?oldid=1878282"
Community content is available under CC-BY-SA unless otherwise noted.