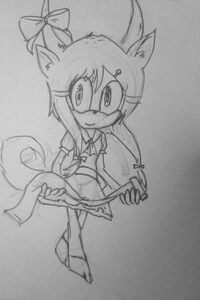 She is very well read and intelligent, and has little to no problem understanding human speech. She is also very old (at least 300 years old) and knows 2 other languages besides English. She is a baí zé, so she can live for over hundreds of years.

Her name means moon in Chinese.

As a bovine-like creature, Yué has cloven-hoofed feet, somewhat long, green tea fur, and a white muzzle. Two sharp horns protrude from her head, with a ribbon tied on the left horn. She often chooses to wear dresses that end around the knee, usually cool colors such as blues and purples. In her true form, she apears to be a bovine-like creature with nine eyes and six horns, in pairs of three and two on both of its flanks.

Yué is very wise, and kind to most people she encounters. She is extremely intellegent and helpful, but only selects those she deems the wisest to converse with her. Yué is also somewhat shy but will quickly open up to those she thinks are trustworthy.

Most of Yué's past is unknown.

Yué is most commonly affiliated with the moon.

Retrieved from "https://sonicfanon.fandom.com/wiki/Yu%C3%A8_Ch%C3%A1ng?oldid=1347184"
Community content is available under CC-BY-SA unless otherwise noted.