"You really are ignorant aren't you? Foolish girl"
—Yin[Author]

Yin the Hedgehog is the fursona of Koumorichan. He is the brother of Yang the Hedgehog(although really they're one person). He appears in Star & Luna season/book 2 which hopefully I'll make.

Yin is a very clever, arrogent, and cunning character. He is very charming and seductive. He can be heartless and maybe even merciless to others. Due to the fact that he is the element Yin, which stands for darkness, cold, and death, he isn't shy about showing it. Yin is also the female element which also means he is a womanizer(although that honestly has nothing to do with it). He gets very close to a certain female, and then rip her heart out!

He shares his theme song with Yang. It is Bad Apple!! by Touhou His battle theme is Dream-Eating Monochrome off-vocal 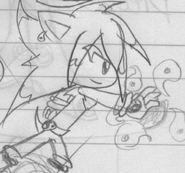 Yin masquerading as a samuri ghost 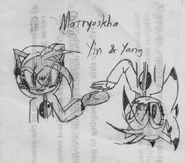 Yin and Yang in their Matryoshka cosplay
Add a photo to this gallery
Retrieved from "https://sonicfanon.fandom.com/wiki/Yin_the_Hedgehog?oldid=1652165"
Community content is available under CC-BY-SA unless otherwise noted.