What makes us supposedly inferior to those Chistosans?! We breathe and live the same as they do, we have hopes and fears the same as they do! They have no right to treat us like mongrels or call us 'corrupt'! I think their cowardice and selfishness makes them the corrupt ones! 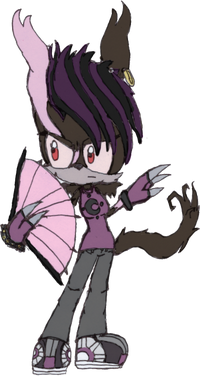 Xusea Griffes the Zangoose (pronounced "zoo-SAY-uh") is a resident of Khaozemli who seeks to make life better for the all Pokémon of the Khaozemli-Sendai faction, even if it means bringing Chistosa to its knees.

She was created exclusively for Pokémobius: Chaos.

A somewhat bottom-heavy Zangoose who stands close to four feet tall, Xusea has a short muzzle with a triangular nose and a relatively long, scruffy-furred tail that resembles the 'tail' of the Pokémon Darkrai, as opposed to the thick and fluffy tail she used to have. Unlike the hands of most Mobians, she only has two fingers and a thumb, with all three digits being thick and claw-like, and her forearms are somewhat thickened, as well; despite her limited number of fingers, she wields her dual tessen with practiced ease.

Due to her mutation, her ears vaguely resemble the wings of a butterfly (having a longer upper part and a shorter lower part), albeit somewhat tattered-looking and rather slim. The longer fur of her shoulders is also swept backwards more, and somewhat shaped like the wings of a bat; the fur is also longer in general.

Also as a result of her mutation, her once-white fur has since been darkened to a dark lava color, with her muzzle-fur now being black shadows instead of also white, while the scar-like markings in her fur, once red, have now become kobi in color. Her hair, which is styled into a somewhat spiky-looking mohawk that also sweeps downwards (and also has banded strands hanging down on either side of her head), is black with Japanese violet streaks in it, and her eyes are jasper in color, with light red sclera.

Her outfit primarily consists of an antique fuchsia and black tank top, antique fuchsia fingerless gloves with black trim, somewhat baggy black pants, and black and antique fuchsia boots with white cuffs, as well as an earring in her left ear. She also wears a bracelet of pink fairy lights around her right wrist.

For Xusea, much of her life was normal before the dimensional disaster occurred; her father worked while her mother was a stay-at-home mom. All three of them were happy and content, until that fateful day came...

Xusea (now 13 at the time) and her family were unfortunate enough to live near one of the extraction points of the planet's natural mineral resources, the eighteen types of gems that once gave prosperity and harmony to the people of Sendai. While Xusea's mother was miraculously unaffected by the rampant genetic mutations spreading among the citizens, her father and herself were not so unlucky, and as soon as they started to show signs of mutation, they were banished to the wastes of Sendai, despite the mother's desperate protests.

Xusea's father managed to survive for one year before succumbing to the mutation ravaging his body, while his daughter survived and even thrived, although her body had been drastically altered; her once-white fur now darkened significantly, not unlike the fur of a Dark-type, and both her ears and tail had changed their shape as her genetics changed. The now 14-year-old Xusea was alone, and scared...and furious.

What gave those unaffected by the disaster the right to banish her, her father, and countless others in their time of need? What drove them to be so selfish that they would sooner let their former comrades perish out in the wilderness instead of helping them to overcome their struggles? Her rage over such an injustice seemed to have fueled her desire to survive, and survive she did, managing to fight her way through the wastes and towards one of the tiny, fledgling settlements, comprised of fellow 'Corrupted' Pokemon. There she has stayed ever since, helping her newfound allies to build a new society, although her hatred of the Chistosans hasn't quelled since... 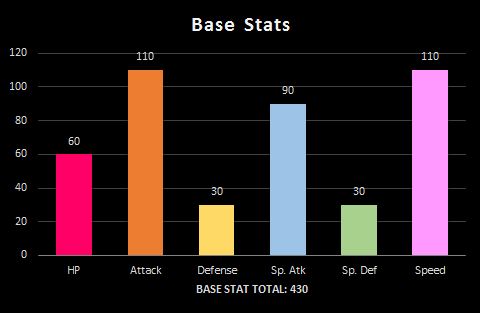 While Xusea does boast respectable physical strength, being a Zangoose, her true prowess shines in her high speed and emphasis on ranged combat, primarily using her modified tessen to launch high-powered bursts of wind; she also carries grenades designed to explode into Poison Powder on impact.

This is not to say she's completely vulnerable in close-quarters, however; being a Zangoose, her claws and teeth are very sharp, and her tessen are formidable melee weapons. However, she suffers from lackluster defenses, forcing her to rely on her agility and the ability to keep enemies at bay with her wind gusts in order to survive a fight.

A brash, justice-driven woman with an incredible hatred for the "selfish tyrants of Chistosa", Xusea only cares for a few things; her comrades in the Khaozemli-Sendai faction, and bringing them the means to make a better life for themselves. She is incredibly compassionate to her fellow 'mutants', despite her somewhat crass and crude nature, and is fiercely loyal to the Khaozeli-Sendai faction.

She's highly protective of children in particular, having seen children (and their families) be forced out into the wilderness following the wake of the dimensional rift; she herself was banished when she was a child (around 13 years old). When encountering someone she hates, she becomes cruel, and takes an almost sadistic pleasure in tormenting her enemy.

The only Chistosan Xusea cares about is her mother, although this is because she fought to keep her family from being banished.

Retrieved from "https://sonicfanon.fandom.com/wiki/Xusea_Griffes_the_Zangoose?oldid=1832392"
Community content is available under CC-BY-SA unless otherwise noted.