Start a Wiki
This is an article about Xlphys the Bat, a character created by Xsdoubletrouble on 07/23/2015. 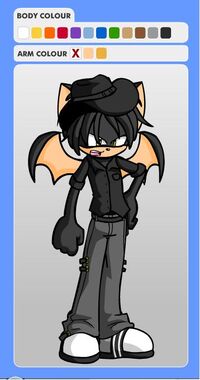 When things get too quiet

Proficient with a scythe

Xlphys is a tall and lean fruit bat.  His fur is midnight black, and his eyes are brillant yellow.  His gaze is sharp, and some say he can stare right into your soul.  His ears are large, and also black.  As for hair, Xlphys has messy black hair stuffed under his black fedora.

While normally Xlphys has no need to wear clothing, he does so simply because he likes to.  His main outfit is a black button-down collared shirt with rolled up sleeves, gray pants, a black fedora, and black, gray, and white shoes.

However, while in colder climates, Xlphys wears a black hoodie with the image of a snake coiled around a staff on the back over his shirt, and also dons a gray-and-teal scarf.

The main trait of Xlphys's personality is how irritable he is.  He will shout at anyone and everyone, and is prone to ranting your ear off.  Also, when someone tries to stop him ranting, he will hit them either with his fist or the first thing that's available.  Few people can actually get him to calm down, and fewer can get him to stop a rant.  Xlphys is also known for making sarcastic and biting comments about anyone he chooses.  Oddly enough, Xlphys is actually known for waking up at around five in the morning.

However, this irritability is an emotional wall he's built around himself.  He is really scared to be alone, and also incredibly cowardly.  While he tries to never back away from a fight, things that scare him past his emotional wall will get him to run in terror.

Not much is actually known about Xlphys.  It's known that at some point his parents up and left him, which led him to build his emotional wall. When he was around ten, he encountered Midori the Bat, who was the first of his friends.

As a bat, Xlphys possesses the ability to fly.  He can stay in the air until he gets tired, and can fly at a top speed of eighty miles per hour.  However, in heavy winds he has to work harder to fly, and as such, tires quicker.  Under optimal conditions, Xlphys can sustain a speed of eighty miles per hour for about three hours, but will need to rest for four hours before resuming. As such, he normally relies on normal modes of transportation for long journeys.

Xlphys is an experienced hacker, and has hacked into systems made by Cobra before. He can be out-hacked, but he's still a force to be reckoned with.

Xlphys has trained with Tammuz, becoming at least able to fight back if he was challenged by Knuckles.

Xlphys has trained himself in using a scythe, which has become his main weapon.

First, Xlphys is not too physically strong.  Second, in heavy winds, Xlphys cannot fly for very long. And finally, Xlphys suffers from arachnophobia, the irritational fear of spiders. Even the mention of spiders makes him uneasy.

Retrieved from "https://sonicfanon.fandom.com/wiki/Xlphys_the_Bat?oldid=1800123"
Community content is available under CC-BY-SA unless otherwise noted.