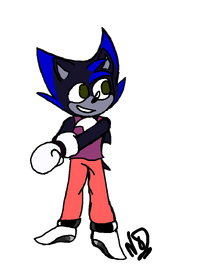 Xiro has black hair with blue highlights, and gray skin. His favorite color, lavender, is often incorporated into his daily outfit. He wears a pair of traditional white gloves and black ankle rings, and his shoes are white with a black base. Xiro also sports a Frycasian hairstyle; his two head quills are smoothed and slightly flattened, slanted upward and pointing backward, though because he uses minimum gel, his two quills have vertically split ends. He has a blue two-ended bang that sticks out from his forehead, and his two back spines are black, curving downward.

Xiro is well-mannered and quiet, as he doesn't care about constantly reminding people that he exists, however he often lets himself get treated like a doormat in fear of losing his temper. He doesn't panic during stressful situations since he was used to his parents' arguing, though he still feels the rush from a battle. He takes inspiration from his mother, Agnes, and wants to be a great boxer just like her. As mentioned before, Xiro tries to keep his pent-up emotions in check, though occasionally he'd unknowingly let them out on someone distant from him, which would make him feel guilty later. He wishes that things were better between his parents, because as much as he loves his mom, he still misses Ayoqa, his father.

Agnes and Aioqa had Xiro on June 10, 2014 in Plymouth, England. When Xiro became three years old, Agnes and Aioqa divorced. Meanwhile, Nibutu rallies up rebels and becomes their general, planning to unite all of Europe, and soon takes over Russia and gradually conquers the neighboring countries over the next three years. Because of this, Xiro and his mother move to Haute-Normandie, France, which is where Xiro meets his best friend Axio. For the next nine years, Xiro will live in France. During those nine years, Nibutu will take over almost all of Europe, and G.U.N. is still trying to stop him.

On 2029, Nibutu stages a surprise siege on France, and Xiro and Agnes have to flee. Xiro and Agnes had to separate when she and Borís let Elijah take Axio and Xiro aboard his own ship, the S.S. Modze-Yndelgo, to America. Once Xiro and Axio made it to America, they were to live with the Polyweathers until their parents arrived.

On the way there, the ship's engine malfunctioned and caused Elijah to crash into the island of the Death Egg Ruins, where Dr. Eggman himself retreated into dormancy decades ago. While Xiro and Elijah were trying to figure out how to escape, Eggman sent his badniks to arrest them, which led to their first fight when Xiro attacked the squad leader. Although they were outnumbered four to two, Elijah and Xiro managed to defeat the robots easily. Surprised by their failure, Eggman arrived to the scene to investigate and reinforce his badniks. It was at this time when Xiro first met Dr. Eggman in person, who was threatening him and Elijah for the chaos emerald aboard the ship. After Elijah denied there being an emerald, since they weren't allowed on-board to begin with, Eggman ordered his badniks to attack and left.

The second battle woke up Axio, who helped Xiro and Elijah. Once they finished the robots off, Axio told Elijah that he had brought his red chaos emerald with him and that it was probably the reason why the ship malfunctioned, which angered Elijah. After Axio put the emerald its inhibitor capsule, Elijah immediately sped away from the island.

Xiro went inside for a while since he believed that he was safe, but later went back outside when Axio told him that Eggman came back, and this time with the massive Egg Lamprey. Xiro, Axio, and Elijah charged themselves with the power of the red chaos emerald, giving themselves enough strength to take on the Egg Lamprey.

During the battle, the Modze-Yndelgo was heavily damaged, and Xiro and Elijah persuaded Axio to sacrifice his emerald to destroy the Egg Lamprey, however the ship still sank, and Eggman was able to retrieve the chaos emerald from the debris of his badnik and left the three hedgehogs in the ocean, apathetic to their fates. Fortunately for them, Elijah had a lifeboat, which they used to sail to North Carolina until they were rescued by the U.S. Coast Guard.

Hours later, Elijah takes the Axio and Xiro to his apartment building to meet his children, Dani and Angel. After Elijah leaves them to rent a car, Dani lets them in, though he himself wasn't as trusting of his new guests as his sister.

Xiro has gravity-modifying chips on the soles of his shoes that can alter his weight and the direction gravity affects him, enabling him to walk on walls and ceilings and fly. Being a hedgehog, he is also immune to most snake poisons.

Xiro learned basic boxing from his mother, and was taught by his father how to spin dash. Since Xiro isn't very fast, his spin dashes are weak compared to others, yet, Xiro's punches are strong. He learned how to unicycle from Ayoqa when he was five years old, and he taught himself how to play the piano while living in France.

Xiro would have to wear white during the winter because his dark fur would just absorb all the sunlight and not give any warmth to him. Xiro is susceptible to pretty much everything a normal human is, and he can't run fast. His anger would often get the best of him, which is why he suppresses it and stays passive, which then leads to him being easy to bully because he's too afraid of himself to put his foot down. Not only that, but his kicks are weak and due to the fact that he just got his G-chips, he doesn't really know how to operate them well; this makes him clumsy whenever he wears them on his shoes.

Xiro as he appears in OCA Beta, talking to Elijah. 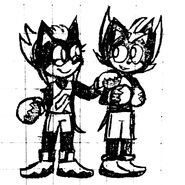 Xiro stands next to his mother, Agnes
Add a photo to this gallery

Retrieved from "https://sonicfanon.fandom.com/wiki/Xiro_the_Hedgehog?oldid=1864157"
Community content is available under CC-BY-SA unless otherwise noted.