Voted Strongest Character of Winter 2018!
This is a page about Xavis Pyrovolt, a character created by XophPsycho

Pro-tip for 'ya: If you want to take over the world, don't make your weapon of mass-destruction sentient and give it a conscience. 'Cause then it'll refuse to work for you, run away, and become best friends with your mortal enemy. But c'mon, like that could ever happen, right Doc? 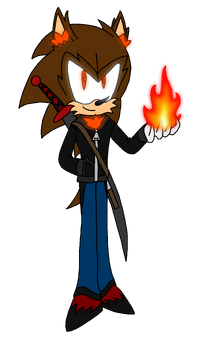 Xavis Pyrovolt (eck-zay-vis) is a 17 year old male hedgehog and the "Ultimate Weapon" created by Dr. Eggman. He's an extremely powerful Chaos User and Pyrochaotic who will never back down from any challenge.

Xavis is a brown mobian hedgehog, roughly 4' 2" in height, with average-sized ears and six large spines protruding from the back of his head in the exact style as Sonic's—though slightly shorter. He has a peach colored muzzle with short fur on either side; a black, upwards bent, cone-shaped nose; and two small fangs in place of his top molars. He has large, conjoined eyes with pointed edges and white sclera. His irises are orange with slit pupils, and are segmented into three parts by thin lines. He has a very noticeable ridge around his eyes with strands of fur sticking off around the edges. His ears have strands of fur sticking off from the outsides, as well as some orange fur inside them.

Xavis' body is mostly covered in orange-brown fur, with exception in his hands and feet. There are orange, fire-shaped streaks running from his wrists and ankles to his elbows and knees respectively; as well as a medium amount of orange chest-fur on his somewhat triangular torso. He also has two small spines coming off of his shoulder blades and a medium-length tail.

It should be noted that his eyes, ear-fur, chest-fur, and streaks are luminescent and can change color depending on his mood.

Xavis almost always wears a black hoodie with dark-gray accents, blue jeans with black accents, white gloves, and red shoes with black spike-shaped decals and metal soles. When he was younger, he had an orange scarf with tattered ends, but at one point lost it. He also has a black sheath with a brown strap for his katana, Destiny, and golden Inhibitor Rings around his wrists and ankles.

To put it simply, Xavis is a stubborn, overconfident hothead with a big heart and an unbreakable will. His stubbornness stems from Eggman and his training, with him having a very determined, never-give-up attitude and a preference to handle a situation himself, often unwilling to ask for help even if needed. His severe ego and overconfidence can also be traced to Eggman, but also to Sonic, as Xavis believes himself to be unstoppable due to his power and accomplishments, often overestimating his own capabilities and diving headfirst into action with little thought. His short fuse and fiery temper can best be attributed to his near-abusive treatment in his youth, with him being very easily set off by minor attacks and even vague, perceived threats to those he cares about. Though he usually calms down quickly.

Despite all this, Xavis is kindhearted, compassionate, and some may even say noble. He holds a very deep care and respect for his friends and allies, and will do whatever he can for them, including risking his own life. He has made it his mission to protect the world and has sworn that he would never kill.

Beneath the surface, however, Xavis hides his vulnerabilities. His weaknesses obviously induce cryophobia, or a fear of the cold, and he also inexplicably suffers from pediophobia, or a fear of dolls. But above all is an overwhelming fear of losing those he's close to, as to him, they are the only things that give his life purpose.

Xavis was created by Dr. Eggman in the late '90s as the 37th prototype for "Project X": an initiative to engineer a living superweapon based on the doctor's own and Sonic's DNA- as well as that of a Pyroden; and the Red Chaos Emerald being used as the power source for his Genetic Reconstruction Machine (or GRM), which spliced and recombined the individual DNA into a new organism. After 36 failed attempts at success the machine begun leaking Chaos Energy into the chamber that created the organism, leading to it exploding on its next use. However- in the midst of the explosion- everything went right, creating Project X's first successful prototype.

For the first ten years of his life, Xavis- for a time known as "37"- was subject to constant, rigorous training to prove he was the ultimate weapon he was built to be. And while Eggman did create Xavis, he was nowhere near a father-figure, instead treating the young hedgehog as if he was just another worthless minion, and he greatly resented the doctor for this. Though, in his training he mastered various forms of combat, including hand-to-hand and swordfighting, as well as using his natural Chaos abilities and Chaos-fueled pyrokinesis- which he dubbed "Pyrochaosis".

This training continued until Xavis learned of it's purpose. Over the past decade, Eggman, by pushing Xavis to his limits had been collecting valuable data that would later be used to create the project's finished model, and the doctor had been planning on killing the prototype he had been training before doing so. However, Xavis accidentally learned of this plan early and promptly ran away. During his escape, he made sure to destroy the GRM, it's blueprints, and the algorithm used to create him, as well as stealing the Chaos Emerald and Destiny- the blade he had been training with most of his life. Shortly after escaping, a lost Xavis crossed paths with Sonic and- following a brief chat- convinced the blue hedgehog to take him under his wing; and within the following weeks he would become acquainted with the majority of Sonic's friends.

((Section to be revamped))

Relationships Xavis has with other characters.

((Lists incomplete. Details to be provided.))

Badass hedgehog drawn by yours truly

The first drawing of Xavis ever made, from way back in 2013.

Made by Julia Finitevus. Thanks Julia!

Another picture from Julia. Thanks! 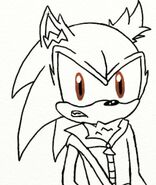 Xavis and Melissa by Snowless Winter

Xavis and Melissa- dressed as Zach Fair and Tifa Lockheart respectively- returning from the 2017 Halloween party at Hang Castle. 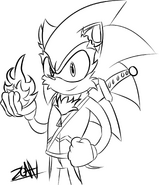 I have no words for this. Just... thank you.
Add a photo to this gallery

Retrieved from "https://sonicfanon.fandom.com/wiki/Xavis_Pyrovolt?oldid=1838568"
Community content is available under CC-BY-SA unless otherwise noted.