This is a page about the Post Genesis Wave version of Xavis Pyrovolt, a character created by XophPsycho

Hmph. You know what? Fine. You want to push me to my limit; to the point of no return? Go ahead. I'll just push you right back. Push you down into the deep, dark abyss that is my soul, where not even the brightest of lights can reach, and my power has no boundaries. So do your worst. I DARE you.

This is an alternate version of Xavis Pyrovolt who exists in the Post Genesis Wave timeline of Julia Finitevus' Continuity. I do not consider this version canon to my own continuity.

Physically, this version is near-identical to the original. The only notable differences are that this one's slightly taller, his fur is a slightly darker shade of brown, and now on his back are permanent, claw-shaped scars that will be kept for life.

Attire-wise it's the same case. This version wears all the same clothes as the original, same black hoodie and blue jeans, white gloves, red shoes with a black, curved spike design, and golden Inhibitor Rings around his wrists and ankles. However, he now wears a long, light-brown cloak with a large hood atop everything else.

In the future, Xavis is much taller, towering over other Mobians at an impressive and intimidating five-and-a-half feet. His fur is much darker, and his spines are larger. He has broad, sharp shoulders with a comparatively thin waist, and several more minute scars riddled across his body.

In the future, Xavis wears a form-fitting red hoodie with dark-gray accents, dark-blue jeans with black accents, and his shoes have fully visible metal soles. Adding to his already intimidating visage, he wears a large, black cloak with a red border, often giving him an appearance similar to that of a monolith.

This version's personality is much less the same, however. He's still quite hot-headed and arrogant, but he's slower, more calculative. He still prefers handling a situation himself, but now tries to take a bit of time plan ahead as opposed to running in fists first.

He's also somewhat emotionally unstable. He gets angrier easier, sadder much easier, and is usually upset for one reason or another. Though, he tries his best to maintain a positive attitude in most situations.

This version's history is identical to the original's up until a certain point. That point being the Super Genesis Wave, which surprisingly had almost no effect on Xavis himself. Instead it destroyed his home universe, leaving him- the sole survivor- alone to drift in the void.

It's unknown how, but he eventually wound up in the new world created by the Genesis Wave. Hopeful, he wandered it in search of anyone he knew from his universe, but never had such luck. His wandering eventually lead to a hotel in Mobotropolis, where he met and joined a small group of heroes working to stop the current two largest threats to the multiverse: Shadow Galaxia and the Genesis Lord. It was among this group he met Chloe-Su, an echidna girl he would soon develop strong feelings for, and vice-versa.

The next day- after a sugar rush, and an attack by a pack of Shadow Wolves and a Shadow Chameleon- the group was captured and brought aboard Shadow Galaxia's Mothership as prisoners. They were quickly able to escape, however, and after a short while one member of the group- a hydrokinetic hedgehog girl named Reens- managed to shut down the Mothership's main reactor, causing the aircraft to plummet. The previously scattered group met up in the main hangar, finding Shadow Galaxia trying to escape. A battle broke out, and while the others boarded an escape ship, Xavis offered to stay behind to hold off Shadow Galaxia and blow up the Mothership- but not before being told by Chloe-Su that she loved him. Soon after the aircraft had collided with the ground, and the others we're a safe distance away in the escape ship, Xavis unleashed his ultimate- and previously thought impossible- attack: Supernova Blast. Though nowhere near maximum power, he incinerated the entire Mothership and everything within a half-mile around it, including Shadow Galaxia and almost himself.

It's unknown why, but Xavis was sent flying and luckily wound up colliding with the side of the escape ship, completely shut down and his cloak gone- most likely incinerated. Though, he quickly booted up, and after a brief scare of potential paralysis, was lead inside the escape ship by Chloe-Su so he could rest and heal.

Soon the authorities came to investigate the explosion, so he was awoken and quickly left the ship to answer them. Immediately afterwards he saw a familiar, yet ghostly face hiding between the trees, and went to investigate. They had a brief conversation, Xavis being informed that it was okay to move on, and that he needed Chloe-Su for his own good. Shortly after the violet echidna exited the escape ship, and Xavis quickly made his move and admitted that he loved her too.

(Info to be added later)

Xavis is set to appear in the upcoming "Rhyna the Echidna: Dark Flames" series, which occurs some two-thousand years in the future.

Relationships PGW Xavis has with other characters.

This version has all the same powers, abilities, physical attributes, skills, and weaknesses as the original, though with some exceptions and additions.

(More info to be added later)

The first drawing of PGW Xavis 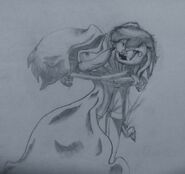 More art from Julia. Thanks!

Retrieved from "https://sonicfanon.fandom.com/wiki/Xavis_Pyrovolt/Post_Genesis_Wave?oldid=1838565"
Community content is available under CC-BY-SA unless otherwise noted.