Start a Wiki
This is a page about Xavis Ignis, a character created by XophPsycho 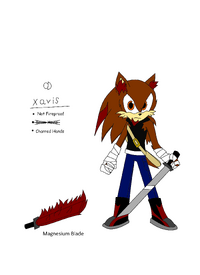 Xavis Ignis is an alternate version of Xavis Pyrovolt who exists in the OverDrawn universe. He's an 18 year old Pyroden/hedgehog hybrid working as a vigilante in the city of Initium Novum.

Xavis is a brown hedgehog standing four feet tall with six spines on the back of his head, a peach-colored muzzle with short fur on the sides, and pointed, orange eyes. There is red fur sticking out from inside his ears, and a red flame-like streak on the back of his top spine.

His body has an average build, and there is a small amount of red chest fur just below his neck. His forearms are burned and very sensitive, and his hands are charred due to his powers.

Xavis wears a sleeveless black pullover hoodie with white trim, blue jeans, and black boots with red and silver designs. White, heat resistant bandages cover his forearms, and around his torso is a light-brown sheath for his magnesium sword.

Many years ago, a Pyroden crash-landed on Earth after escaping the destruction of his homeworld, Incendia. After a few years of hiding in a Mobian form, a hedgehog woman found and befriended him, and he quickly fell in love with her. Eventually, the two were a couple, and after three years, they had a child.

However, their home had erupted into war soon after Xavis was born, forcing the young family to flee. After several attempts, he and his mother were able to board a boat, but his father was held behind and hasn't been seen since. Eventually, the two arrived at the city of Initium Novum and made it their new home. But unable to bear the loss of her love and fearing she was unable to care for her child by herself, after a month, his mother left him on the doorstep to an orphanage. The last faint memory he has of her is the sound of her crying.

The orphanage dominated almost all of Xavis' memories. They were dark memories. The place was far from pleasant.

From what he knew, in his babyhood, it was actually mostly fine, though the couple running the place were sometimes a little neglectful. Occasionally they forgot or were just too busy to care for the children, but not too often. There were a few difficult kids, but they hadn't been a problem, not yet, as at the time Xavis was kept in the couple's room. Although there was the time someone came in and cut off all his fur. Fun times. And they never found out who...

His first solid memories came from when he was a toddler, when rising tension between the couple who supposedly looked after the children began to tear things apart. Arguments and fights took attention away from the kids, and nobody passed up an opportunity to rough up Xavis when nobody was watching. Perhaps because of their deteriorating relationship, the couple soon deemed Xavis old enough to sleep with the other children in their care. He was now forced to spend all of his time in the presence of the other kids, and their company became increasingly toxic.

The couple's relationship was due to deteriorate further. After the husband left--Xavis was too young to understand why, but it involved even more shouting than usual--the wife began filling the void he had left behind with alcohol. When she drank, she got violent, and Xavis was the target of her drunken rages more often than not. This, along with the tormentive treatment by the other children caused him to develop emotional issues that made him easily angered and violent in return, which only made things worse for him.

Then one fateful day, when he was sixteen, something in him snapped. He couldn't take it. No. He ‘’wouldn't’’ take it anymore. Years of abuse had lead to this. Flames blossomed from his skin where he was backed into a corner of the grungy room. The greasy, peeling wallpaper crackled and began to burn. Everything around him began to ignite. The woman who had only a moment before been hitting him began to back away with a look of confused terror dawning on her face. Xavis was only relieved, for a moment, before he noticed the fire--and the pain--then he ran.

Ran, out of the burning building, and away from all those horrible people.

Out of the ashes of the home that had only ever briefly deserved that name, and away from all the suffering it brought him.

Out onto the sooty streets, and away from all the screams of those trapped inside.

Running anywhere but the only place he had ever known.

Relationships Xavis has with other characters.

Xavis was born with the power of pyrokinesis, which he inherited from his father, but didn't discover he had until the day he burned down the orphanage. He is able to create fire between 400°C (750°F) and 3,000°C (5,430°F), be it in balls, continuous streams, or simply causing something nearby to ignite. However, he isn't fireproof, meaning his own flames can, and have, burned him. Because of this lack of immunity he seldom uses pyrokinesis to create fire.

However, he can control fire without any risk to himself, so long as it doesn't touch him. Though, this ability still needs much fine-tuning.

Xavis naturally generates heat, making himself and the air around him warmer, but never to a point of discomfort. He also has a high metabolism and his body can heal wounds relatively quickly.

As a hedgehog, he can curl into a ball, but generally doesn't, and can use his spines as weapons if needed.

Xavis is a mostly self-taught but skilled hand-to-hand combatant, having trained himself to fight for his own survival in the orphanage, and having received some training from Cassie. He's also becoming proficient with wielding his magnesium sword, the blade of which is able to ignite, having recently been receiving lessons from a local dojo.

Despite being half Pyroden and a pyrokinetic, Xavis lacks any natural fireproofing to protect him from his own powers. This has caused his forearms and hands to become badly burned and extremely sensitive beneath his bandages.

He also has a slight intolerance to low temperatures, and a slight allergy to cats--including Mobian cats.

Retrieved from "https://sonicfanon.fandom.com/wiki/Xavis_Ignis?oldid=1838634"
Community content is available under CC-BY-SA unless otherwise noted.