Start a Wiki
This is an article about Xahlia Vhan, a character created by Frozen Scorpio on 11/8/2014. 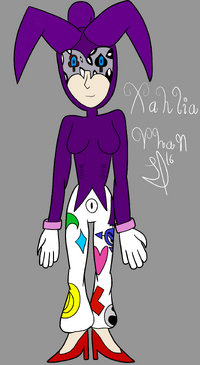 Xahlia Vhan is Sartorius Vhan's wife and assistant in his plans to drag the world into Void.

Xahlia Leight was born into a community of thieves, and from childhood was forced to be part of her family's traveling carnival. They would constantly travel the world, amusing people while conning them of their possessions, though Xahlia had always found this just too desperate for her doing. At age ten, Xahlia had ran into Sartorius, who was simply rushing to the library to study magic and other such powers, and had decided to help him, having seemed to see something in young Sartorius. From then on, she would decide to help him in his plight for power, constantly searching for some way to bestow powers unto young Sartorius, while also becoming interested for such abilities on herself. They would eventually come across a magic tome detailing all kinds of dark and demonic rituals and summonings, and both decided to each take a chapter for themselves and initiate the ritual describes within.

Xahlia's ritual would bestow powers of immortality of age and low level wish-granting unto her, though she seemed to retain her sense of self-control. She would go to see Sartorius immediatly afterwards, but found that he was not so lucky with controlling his powers, causing mass destruction and death when trying to use his newfound powers. Xahlia then attempted to stop Sartorius' rampage, but got severely injured and knocked unconscious in the process. This would bring Sartorius back to his senses, and seeked help for Xahlia, but nobody would help him after his destructive rampage.

After his exilement, Sartorius finally found someone to heal Xahlia, and their relationship seemed to remain the same, but it now became Xahlia seeking help for Sartorius' lack of control. As time would pass, Xahlia too would slowly sink into madness from her ritual, and her wish-powers could only do so much at such a weak state. As they entered adulthood, both Sartorius and Xahlia would become completely swallowed in madness, which would allow Xahlia's power to truly blossom.

As Sartorius would begin to conquer the very land that abandoned and ridiculed him, Xahlia would rule by his side, while using her wishing powers to constantly buff the two of them to near-invincibility. This long reign of twisted terror would go on until Sartorius' eventual subduing and execution, leaving Xahlia alone in the world once more, being unable to revive her love due to a curse put on his soul during the fight. She would wander aimlessly for several hundred years, often wreaking havoc wherever she went out of rage for her lost love. Even at this state, her wishing-ability could not do anything to help him.

She  eventually became the first female ruler of SoulStice Corporation, which was short-lived but still remarkable, being the ruler that would set SoulStice (later EQuartz) down the warpath. Even if she could not die of age, her body would wither as time passed, eventually leaving her a mere husk of who she once was. She eventually met a greedy crow named Jeremiah Mann, and for a smal fee, granted him immortality as a wish, which he took as bluffing at first, but eventually realized that he was wandering down the path that made him into Hersephenes.

She was later killed by the very same man she cursed, having swallowed her in his oil-body and basically crushed her to death. Her soul was then consumed, but somehow not absorbed into him, and was rather pulled out and sent into the Void of Memory by her long-dead love Sartorius, who had now become the base of the void. He had restored her physical form to that of when they were younger, but could not seem to recreate a majority of her face/covered areas. He would bestow mountainous amounts of energy created from many lifeless objects that had been sucked into the void to restore her wishing-powers to beyond their peak. As she was recently brought into the void, she was still capable of returning to reality with little issues, and would use this to both her and Sartorius' advantage. She now travels to-and-from reality and the void, constantly bringing objects/people to feed her love's insatiable hunger for power.

Events of the EQuartz Committee: Season 3

Xahlia first appears shortly after Mr. Strings' defeat and makes quick work of the remaining EQuartz members. She was about to finish them off when Mr. Strings used the last of his energy to block the attack, costing him his life. She does not appear once again until episode 40, when EQuartz begin the assault on the Void of Memory, but must first cross through the Chaos Realm, Xahlia's home. She quickly sends her own army, including powerful people such as Shining Raymundo and Alice, to combat them. After both sides are heavily weakened, though EQuartz was successful, Xahlia traps and scatters them throughout a magic labyrinth and toys with their minds, even going so far as to appear directly in front of Jared to taunt him, saying that he is a pathetic leader who has only gotten by on the words of another, rather than thinking for himself, then leaves shortly after, boasting about how much fun it will be to destroy them all.

Once EQuartz regroups at the end of the labyrinth and rest, they head off together to face Xahlia. She wastes no time in making fools out of them, quickly defeating several of their members before showing off a new ability, where she turns those she defeats into patches on her clothes. They attempt to flee, but Xahlia ruthlessly pursues them throughout her palace. Bonesy, Twitch, Gretchen, Éloise and many others fall to her power, and just before she was about to take the rest, Xahlia is surprise attacked by Mr. Strings' allies, who have now decided to join EQuartz and make up for their past mistakes by helping them. Xahlia is forced to retreat while losing some of her patches, freeing Bonesy and Tomoe from her spell.

Later, Xahlia returns with another army and is ready to fight, when suddenly a burst of light hits her from behind, freeing the rest of her captives while also destroying a good portion of her army. As it turns out, Shining Raymundo had betrayed her and joined EQuartz too. The battle begins and quickly turns in their favor, when Xahlia decides to release an attack "intended to end the very dimension she rules," but is stopped by Alice, who had also had a change of heart. Being held by Alice's magic strings, Xahlia is unable to move or retaliate, and suffers a fatal attack from everyone's emblem fusions, the final blow being landed by Sandshot (Frida and Antonio's fusion.) Xahlia quickly disintegrates into pure dark energy that seems to fade away, and other than a brief appearance as a summon from Sartorius, Xahlia, at least in this form, is no more.

Xahlia appears as a sort of female humanoid clad in a black and violet suit, while wearing a 4-pronged jesters headdress and a flipped black and white mask. She stands at around 6'4", and has long, gray hair hanging from the back of her head. The rest of her clothing is typical jester attire, such as baggy pants and curved shoes that bend backwards at the front. Underneath her complex clothing is a feminine physique, but lacks any skin or visible features, only leaving a space-like void in the shape of a woman with the light of those she's consumed constantly rushing throughout it.

Xahlia is best described as a "Vain Clown." Living for hundreds of years after her husband was executed, Xahlia was driven deep into madness, though still had a grounding in reality. She appears to be the more organized of the two, often creating strategies and complex plans for accomplishing her goals. It seems as if her motives are fueled solely by a longing lust for the old times, when she and Sartorius were much younger and weren't considered outcasts of society before being completely forgotten by the endless march of time. She seems to possess a huge obsession with her appearance as well, often hiding her body in bright and garish clothing despite physically being in her prime, from fear of the reality of her true age and the effects it once had on her body.

From her past life, Xahlia has the power to grant wishes, whether her own or other people's. Like Hersephenes, she uses this to (at first) dazzle and lavish the wishmakers in their desires, then immediately flip the tables and lead the wishmaker into utmost despair, though tries to make it so that it seemed as if the wishmaker never existed, this being done so that she can bring them into the Void of Memory with her and either feed them to Sartorius or absorb them herself.

A few abilities were granted to her after reuniting with Sartorius. One major power from this was an ability to travel between the void and reality, as she was never fully assimilated with the void upon entry like most others. Another power is that she can essentially multiply herself by splitting her energy into multiple copies of herself. These clones have only a fraction of the original's strength, but still seem to be quite effective when bringing things down to the void. However, Xahlia's main and most dangerous power is absorption through... clothing. If a target is weak enough, she can effectively absorb said target into her outfit for a plethora of things, including regeneration, power-stealing, using the absorbed targets as shields, and simple increases in her own powers. She mainly uses this as a method to thin out numbers of attackers, while scaring off weaker-willed ones to make things generally easier for her.

Xahlia has a few weaknesses to note when encountering her. These include:

Retrieved from "https://sonicfanon.fandom.com/wiki/Xahlia_Vhan?oldid=1691434"
Community content is available under CC-BY-SA unless otherwise noted.