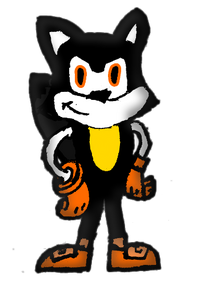 Wreck the fox (Fokkusu o hakai / フォックスを破壊) is a fox from the Sol dimension.

If you imagine a Mobian fox {with one tail} Give him a Dark Black face and yellow eyes, a mouth similiar to sonic's except it is white, give him orange gloves, shiny orange shoes and a yellow tummy Then you have Wreck. The true appearance of Wreck is not entirely (but nearly) the same as the picture above. He has a yellow tip of his tail (in the sense that tails has a white tip of his tail) and his belly is furry not smooth.

He has a thirst for crushing anything that goes against him and so he is described as a troublemaker as he is quite sensitive. But, if he's in a good mood he'll be really friendly and will try to avoid being mean.

He was born in a building that was wedged into the fabric of space due to the fact that his country was invaded by professor manticore [professor manticore is not my character!] and his childhood project which lasted for 5 years was to get him out of this area of nothingness. He eventually {with the help of friends} created a machine that could take everybody in the rift out. The people who had been imprisoned rose up against manticore and their country was free. This was when Wreck met Frankie the bat and the 2 became friends an later became a couple. He has gone on many adventures since but none of them have been classified.

Friends Made by other people

If you like my characters [[[lunic the hedgehog]], mist the morph , Oix the neon ] then add your characters here. Plus, I am very annoyed that no-one has put a character here it is incredibly frustrating! Just put your character here anyway. This is getting ridiculous now. At least put one here. Thank you very much for putting some in!

If he is attacked with any kind of laser he is greatly weakened.

Skyfall (look it up)

In order of Power

This is the most recent photo of Wreck that I made.
Add a photo to this gallery
Retrieved from "https://sonicfanon.fandom.com/wiki/Wreck_the_Fox?oldid=1800655"
Community content is available under CC-BY-SA unless otherwise noted.