I couldn't be prouder even if I had known you. You've both grown into fine young men, and great warriors to boot. I'm proud to call you my sons.

— Wilson to Stan and Rex after the battle with Infinite, Storm of Evil

Wilson the Wolf is a character first referenced in a camcorder found by his younger son. He is a tech genius Wolf forced into employment by Eggman to help with his evil projects, but later murdered by Infinite when he tried to leave. Wilson is the protagonist of the prequel A Dark Secret, which explores his unwilling involvement with Eggman, and the story The Lone Wanderer, which provides more backstory for him. 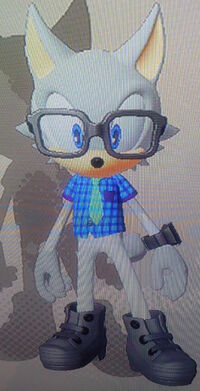 Wilson is an anthropomorphic Wolf Avatar with pale gray fur patterned with white flames, blue eyes, a black wristwatch on his left wrist similar to his elder son Stan's, a blue plaid T-shirt with a green necktie, black shoes, and gray-framed glasses like Stan's.

"I swear to the Spirits, Eggman, if you hurt my family..."
—Wilson growling to himself, A Dark Secret

Wilson is a family man, putting his family above all others in terms of priority. He was even willing to go along with Eggman if it meant saving his family. Wilson is also unafraid to speak his mind, lashing out at Eggman for keeping him away from his family. Even though he never got to see them grow up while alive, Wilson has expressed great pride in his sons for becoming warriors, and sympathy for Stan for the way Infinite tricked him. Wilson is also devoted to his wife, as his first thoughts as he died were of his wife and children.

Before the Series: One day when he was walking home, he ran into a frantic Rabbit named Lambert, who warned him that his family was in danger, as Eggman was threatening them. When he arrived, he found his family under threat from Eggman and a group of rogues commanded by a mysterious stranger, who proceeded to grab, pull away, and threaten the youngest son, Rex. Eggman mocked Wilson, saying he knew of Wilson's tech know-how and promised him that if he went along peacefully, he'd leave his family in peace. Feeling he has no choice, Wilson agrees. Shelly begs him not to, saying they could move to a safer place, or even find the warriors, but Eggman laughs and mockingly states that he'd find them no matter where they went. Wilson assures his wife that everything will be fine, telling her he loves her very much before packing his things-taking along the camcorder that would record his final moments. Days before the Great Rebellion started, Wilson tried to leave, but was brutally murdered by Infinite.

Life in the Wandering Wolf Pack: Wilson was born into the Wandering Wolf Pack as the son of the then leader Evan and his mate Lacey alongside his older brother Samson(ironically, both Evan and Lacey are brown with no pattern while Samson and Wilson are pale gray each with a pattern of their own). Unlike his brother, Wilson was disillusioned with life in the Pack, and wanted to find a place to settle permanently, which his brother could not understand. After a fight with the Destructix, Wilson decided to leave the Pack and find a place to live, and while his family was reluctant, they let him leave, wishing him farewell. Wilson traveled until he found Red Gate City, where he chose to live, and grew close to a citizen named Shelly. Wilson's troubles weren't over, however, as Scourge the Hedgehog continued to bully him, and during a Destructix raid on the City, the two fought a vicious fight that resulted in a sound defeat for the Hedgehog.

The Rising Darkness: In the Prologue, it's mentioned that Stan was Rex's legal guardian since their mother's passing, as no one knew what happened to their father. Later, in Eggman's abandoned lab in Metropolis, Rex Storm and Pebble the Lycanroc discover a camcorder with videos taken before the Great Rebellion and discover the camcorder's previous owner was Rex's father Wilson. Rex takes the camcorder along, viewing it as his only remaining link to his father. Later, Rex shows the videos to his older brother Stan, who comes to terms with their father's fate.

The Storm of Evil: Wilson is mentioned a couple times in Stan's thoughts. First, when Stan finds a young Zorua named Shade alone iin the forest, he recalls the video Rex showeshows him detailing their father's death. Later, after the final battle, Wilson meets both of his sons for the first time in a long time. He states how proud he is of both of them, and gives Stan his sympathies because of how Infinite tricked him. He then goes with his mate and the rest of the Spirits who helped in the fight, finally at peace despite Infinite still roaming free.

While possibly not a true skill, Wilson has a lot of technical know-how, being an IT person. It is possible he is skilled in robotics, but it is only mentioned that he does computer repair.

Wilson always puts his family first, and Eggman exploited this by threatening Wilson's wife and sons to coerce him into helping him.

Shelly is Wilson's beloved wife, and he is deeply devoted to her. It is shown that even as Spirits, they care about each other very much.

Rex Storm and Stan the Wolf

Rex and Stan are Wilson's sons, and while he never got to watch them grow up, he is immensely proud of their decision to become Storm Fighters.

Wilson has a deep dislike of Eggman for threatening his family and forcing him to work for him. This was evident even after Wilson's death.

Right from the beginning, Wilson garnered a deep-seated hatred for Infinite, who was clearly more than willing to threaten an innocent child, as he did with Rex, to get Eggman's point across. Due to Infinite's superior attitude toward him, especially after he gained the Phantom Ruby, the villainous jackal made the Wolf's life and hatred of him worse. Infinite was more than happy to kill Wilson when he tried to leave, which only fueled the Wolf's hatred after his demise. 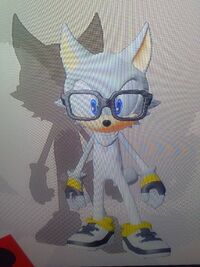 As a Wandering Wolf

Wilson's story, A Dark Secret, is the second in the series to end with the main character's death. The first is Garrett the Fox's story, Shadows of the Past.

Wilson's new prequel The Lone Wanderer reveals that Wilson was born a Wandering Wolf and is the brother of Samson, making Rex and Stan the cousins of Ash and Tyler.

Retrieved from "https://sonicfanon.fandom.com/wiki/Wilson_the_Wolf?oldid=1821135"
Community content is available under CC-BY-SA unless otherwise noted.