Willow was born to a rich and overly strict priest and priestess on February 15, ****. As a young wax girl, Willow found herself alone and lost on several topics, even when with others. She often kept to herself, roleplaying that she was in conversations with people, which she also used to express her emotions, which gave her comfort. This is a habit she did not break for a long time, and as such she had practically sheltered herself from the world. Whenever she did try to socialize with people, she found difficulty from shyness and interests in what were considered taboo by other kids around her. Her parents seemed to have planned her entire life for her, rather than letting her decide how her life goes through her own choices, never allowing her to truly express herself in ways that she wanted to.

This loneliness continued until about the age of 13, where she had found a Crucite Larva, having just recently hatched, calling out for a caretaker, with a taller, deceased Crucite corpse nearby. Seeing as how she did not want for such a young and defenseless creature to lead a similar life of loneliness or otherwise die, Willow decided to care for it, naming it "Jared." Written on the inner walls of the pod were instructions for raising it, though most of it was written in a language she had never seen, so she wrote down everything for later. Her parents, believing that he would only be a burden and would ruin all that they had planned for, refused to let her do so, and she ran away, searching for a place that she could raise him in peace. After some time of searching, she settled down in an abandoned orphanage, and cared for him and helped him gain some of his interests until he was around age 7, where, as rooted in the brains of Crucites, he left. During that time, she began to figure out more about Crucites as Jared decoded bits of the inscribed instructions over the course of his time with her.

By then, she had shed her wax-body from years of fighting to protect and supply for him, and throughout that time, she began to develop her own interests in socializing, as she had met and made a few friends, as well as developing several unrelated skills that she used for past jobs. She eventually decided to lead her own path, causing her to meet many different people and go a great number of places. Many years later, she had met up with Jared once more, who at this time technically owned the EQuartz Business Dept. He told her of the other half of EQuartz, and she was interested in being able to help the spirits of the dead finally achieve eternal happiness, so she decided to join. He gave her a new hollow head to better protect her flames from burning out and quickly admitted her.

Shortly afterwards, she was introduced to Bonesy, where at first, he was too shy to talk with her, but slowly they began to learn about eachother more, which eventually blossomed into a strong friendship between them. Now, she works as the company psychologist on top of soul collecting, supplying others with knowledge on overcoming their own social anxieties and other issues either physical or mental.

(Events of the EQuartz Committee: Season 1)

Willow, despite being somewhat of a social person, is still a little shy to newcomers, and doesn't really try to direct attention to herself, and as such it takes her a while to get used to seeing new people. Around people she knows well, she feels really comfortable, and is willing to discuss personal information with the right people if her mood is positive. She often asks for one's consent if she is unsure about something. Despite her bashfulness, she can be seen as the mediator in an argument, even when she is unaware of who the arguers are. She also has a weird obsession with reading romantic novels, even one's that delve into explicit content. At first, Willow was quite supportive of Jared's actions as head of EQuartz, but now tends to worry about what he's doing, but still tries to hide these feelings of protection.

Despite being a ghost, she has a tangible form, though can still travel through objects and people at her will. Her other abilities involve turning invisible, generating fire to either throw or set herself ablaze, floating (thus making her immune to several ground-type moves), and combining with open flames to either hide or rest. By use of psychic abilities, she can move objects around without touching them. Another ability of hers is that she can actually leave her body as a small flame in the shape of a humanoid. This form is very fragile and is incapable of using any non-fire attacks.

Being made of fire, Willow has a few obvious weaknesses. starving her of oxygen can lead to her flames burning out, causing her to slowly die as the oxygen depletes, water and dust/dirt can easily snuff her out as well. When she's in her smaller-flame form, Willow becomes incredibly weak and is incapable of using any non-fire attacks, and even those are heavily weakened.

Willow's head is a cyan glass sphere with a violet fire inside. A lavender coat of glass resembles and even functions as her hair, which is often cut somewhat short and cleanly presented. 6 black prongs emerge from the higher area of her head, each with a small violet flame emitting from them, and a much thicker stub with a larger fire at the very top. Her eyes are small yellow circles and she wears square-glasses with a spiked edge on both sides. Willow wears a red vest with a violet-gray undershirt, plain white gloves cover her hands, a black/red(lighter shade) striped skirt, and violet-gray stockings. On her vest is an emblem with a violet flame symbol drawn on it. Being made of fire, Willow can alter her physical form, though is usually kind of flat from the front with somewhat more rounded hips/legs.

Willow, to me, is more than just a character. Before I made Willow, I was suffering through depression from low grades and the realization that I had no idea what I was truly going to do with my future. I turned to video games to distract me from this feeling, and this is what led me to play more of Pokemon Black 2. I had gotten to the Celestial Tower, and I remembered that this is where Litwick is caught. I searched for almost half an hour for just the right one, and had found one with a bashful nature, who I had named "Willow."

I then trained the little lady from Litwick to Chandelure over the course of the rest of the game, and used mainly her, my Darmanitan "Darmani," and my Excadrill "Gutsman" to defeat the Elite Four, and guess who landed the final blow to finish the game. That's right, that was Willow. After the main story was completed, I decided to make this page and, to honor the memory of my best pokemon, made the page based on her. To this day, Willow remains an important asset to my team, as I had used the Pokemon Bank system to transfer her and the rest of my B2 and Y pokemon over to Alpha Sapphire. Like I said before, Willow is more than just a character. Willow... is a part of my life, who serves as a reminder that things really do get better, and now that I have the EQuartz Committee and it's massive cast of characters to work with, things will only get better, especially considering that pretty much anything can get on TV these days.

Now, as for her importance to the aformentioned EQuartz Committee, Willow serves as the lead character for the first season and a major character throughout the other two seasons. She is a kind, patient worker whose job is to calm upset souls and help them part with reality so that they can ascend to be judged with a clear conscience. She interacts fairly well with the other members of EQuartz, most notably Bonesy, her partner, Jared, her son and boss, the list goes on. This is also helped by the fact that she is one of EQuartz' liscensed Therapists, who help upset people find happiness in their life by guiding them on a happier path or just give generally good advice. In the third season, her interest in a card game called Guchamon begins to show, and even becomes somewhat of a major plot-point as the String Paradise arc progresses. (to be updated)

Prototype of Willow's God Tier Form, as the Maid of Light

Willow Redraw (Note: MAY BE REDESIGNING TO BE MORE HUMANOID)

I cannot believe that it's been almost a whole year since I first caught the Litwick... the Litwick that changed my life forever. 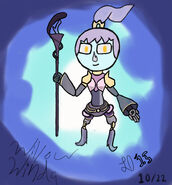 Not exactly the best way to debut her new design but whatever I've been mulling over this for at least 10 minutes now and I might as well just do the thing. 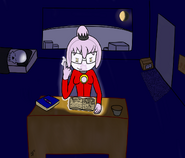 It's a piece of cake to bake a pretty cake.
Add a photo to this gallery

Retrieved from "https://sonicfanon.fandom.com/wiki/Willow_Infiern?oldid=1828822"
Community content is available under CC-BY-SA unless otherwise noted.