Start a Wiki
Wild the Skunk 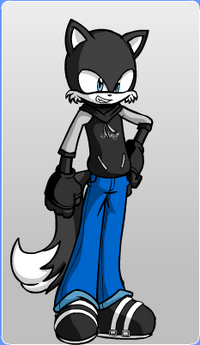 Wild the Skunk is a young, male skunk. He is the speed member and former leader of Team Blackout and a character created by Fierceflame9001 for Untitled.

James Gallager was born to buisness owners and multimillionaires Colin and Selene Gallager in Kalis' most prestigious and expensive hospital. All throughout his life he was supported by his parents and their seemingly limitless wealth, he went to the best schools and he almost never got sick. However, James differed from his parents. James was not satisfyied with having everything he need because his parents didn't see a need for him to have friends.

This slight rebellion increased drastically when James became a teenager. James wasn't satisfied with his life and this motivated him to sneak out of his house at night to socialize. He even gave himself the nickname "Wild" because it was the only time he could be wild. This sneaking out became second nature to him, live the day civilized and educated as James and live the night partying and hanging out with friends as Wild.

It didn't take long before a series of bad, drunken descisions led him to the poorer parts of Kalis. It shocked Wild, knowing that people were living with practically no possesions wheras him and his family were living like gods. That night, he decided to start using his family's wealth to help the poor. For the next few weeks he used his extensive knowledge of computors to steal money from his parent's buisnesses and transfer it to the bank accounts of the poorer citizens, using the screen-name 'Blackout.'

Eventually, Wild's parents found out and almost immeadiatly disowned him, saying he was not fit to be a member of their family. This left Wild out on his own with nothing to his name. The only plan he could come up with was to find a famed theif with a purpose similar to his and form a team with him.

Wild's personality is a mixture of calm and controlled, and wild and outgoing. He often tries his hardest to be social and friends with others (which often leads to clashes with Hip the Hopper, who is not a social person.) He is also very intelligent and likes to think things through before doing them. Wild is also very argumentative and doesn't take opinions different to his own lightly.

Gasses - Wild has the ability to create different types of gasses and jet them from his tail. These gasses have a variety of effects, such as sedating, tear gas and smoke.

Intelligence - Due to the tutoring he recieved as a child, Wild is very intelligent and has large knowledge of subjects including computors, history, economics, buisness, math and science

Speed - Wild, being the speed member of team, is a very fast runner and can use some of his gasses as a from of propulsion

When Wild comes in contact with the Teal Emerald of the Infinity Emeralds, he fuses with Literius, the spirit of the Teal Emerald and becomes James of Wisdom. Like Hip, when in this form Wild is almost always being controled by Literius. However, unlike Mojo, they can come to agreements about what to do and rarely have arguements.

Retrieved from "https://sonicfanon.fandom.com/wiki/Wild_the_Skunk?oldid=1473683"
Community content is available under CC-BY-SA unless otherwise noted.