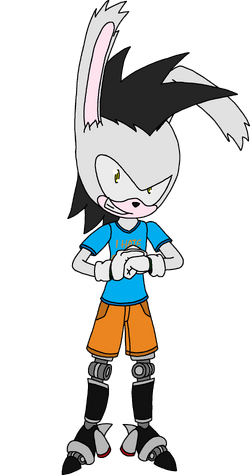 White Ainekas the Rabbit is multiple things - the only Ainekas son, Schnee’s older brother and all-around normal guy. He is one of the more sensible characters in the Lamak Zone, and he’s one of the strongest out of Team Mask, Team Saturn, and Team Watts, with only Kennedy and Mac before him (though Terra gives him some good competition). A more in-depth description of White’s role in the series is provided below.

White is a white-furred bunny who stands at 3’7 and weighs in at 78 lbs. White’s fur is snow white, with no kind of scent slightly changing its color. The opposite can be said for his hair - it is black, but has streaks of grey flowing through it. White’s hair stays at the top of his head and spikes up three times. At the bottom part of the back of his head, he has a bit of black hair that droops down.

White is a bit skinny, with a lack of meat on his bones.

White, appearance-wise, never really wears anything that distinguishes him from someone who has the same fur color, species and hairstyle from him. He prefers to wear more casual clothing, like a black shirt with a skull on it and camo jeans or a red t-shirt with stars on it with black pants. White doesn’t really care how he looks - as long as he doesn’t look bad, he’ll be able to live with his appearance.

White’s favorite outfit has to be a blue shirt saying “I Hate Orange” and orange shorts, not because of the joke, but because it gets to show off his mechanical legs. White feels very proud about them, so he likes wearing shorts to flash them around.

White is the type of person who leads, going with his gut and using his schema in order to make intelligent decisions. He tries not to let bias affect him when he needs to make smart choices, and he attempts to allow everyone's thoughts to be included when doing so.

White has a low-mid amount of sympathy to a high-high, depending on what he's doing. This is a result of being set on something once he starts, so even when he doesn't want to do something, he'll do it, simply because of his willpower overpowering him.

White is fairly snarky, similar to most of Max's characters. He tones it down when with other people, however, and really only jokes around more commonly when he's with his friends. He could seem kind of boring if you didn't know him due to this.

White is a very blunt person to most people, usually not giving off too much emotion. He doesn't try to be especially nice, but he never tries to be very rude, either - he just acts like himself. He usually attempts to avoid starting conversation out of nowhere, and even if something intrigues him, he'll just think about it instead of present his thoughts.

White is very good at shutting his mouth - he knows people's personal limits, and always attempts to not push it too far. Only a few things can get him so worked up that he'll push past those limits - for one, people who apparently exhibit no sympathy and can do ruthless things like it was Tuesday. Instead of directly confront those type of people, White likes to deceive them and then teach them a lesson about the pain they cause.

White is very easily influenced by his friends, even though it's usually him who is doing the influencing. When one of his friends tells him to stop doing something, usually, he'll stop. And while most people do have the "He won't stand for people who hurt his friends" trait, to differ himself, White usually won't go into a cliche rage mode and will instead give the attacker a real talking-to.

Alban Jacques Ainekas was born to Willow Rajah Ainekas and Jackson Blueg Ainekas. His childhood before he became two was fairly average - he learned how to speak little words, and learned to crawl, he was simply another baby that was with some average parents.

However, when he was four, Schnee was born.... as an accident. Due to a mistake, Willow was pregnant with a child she couldn't handle. Willow didn't want an abortion, believing she was going to be able to take care of her children.

Alban by himself already took a lot of their money to keep him well-fed and with enough clothes to wear. The cost of raising Schnee doubled that, and the Ainekas got into a battle they couldn't win. Jackson, feeling guilty for causing the family to nearly dive into poverty, starting working double jobs, barely enough to keep the family on their feet.

Jackson urged Willow to do the same, but the latter had been so stressed with her job already that she got into drinking. Because she constantly wasn't thinking straight, she was fired from her job. Though Jackson tried to urge her to think clearly, she got mad at him while in a drunken stupor, saying "it was all his fault." She issued a divorce petition against her husband, and they did get divorced - it just wasn't in her favor. Jackson was the one who had to keep the kids. And thus, Alban lived most of his childhood not even remembering his mother.

The rest of his childhood was fairly average - Alban went to school (where he got his nickname "White"), he made friends (he made his best friend and apparent neighbor, Tina Dante), and he learned things. It seemed like because of the divorce (and the mother still sending money to Jackson), everything was going to take a turn for the better. The Ainekas family would actually have a chance at a normal life.

However, everything took a turn for the worst.... after the accident.

One day, at age 14 White and his father were simply driving during errands, with nothing special out to do. However, a reckless driver ran straight into their car, right through the window where White was sitting. Due to White's habit of leaning left while driving, only his right shoulder, right side of his stomach, and his legs were hit.... but the damage was bad.

After a lot of treating in hospitals, White was eventually given prosthetic legs to replace his old ones, which was only possible with extra money sent from his mother. A thirteen-year-old Schnee was in a "geek" stage at the time, and loving tinkering, she begged White if she could experiment on his legs to make them "cooler." Knowing he wouldn't feel any pain, White agreed.

It started small, with tiny thing added, such as gears added to make him run faster, or springs implanted to let him jump high or farther. After a year, White thought that Schnee had basically made him into a superhero and was very grateful. Then, through ways unknown, a year later, Schnee found some more.... dangerous things to implement.

Somehow, Schnee had acquired bullets, firing mechanisms, nerve triggers, and fuel. Wanting to experiment on White for one last time, White's legs were upgraded to an insane point, where he could be an assassin if he wanted to. White was extremely thankful because of Schnee, but after their father found out what Schnee had been doing, he wasn't happy.

Saying that Schnee was a potential danger to their family, Jackson kicked Schnee out of the house, sending her to a place White wasn't sure of. White, angered after having starting college to study archaeology and getting cooler legs only to have his father step all over his bad luck, left Jackson alone in the house after buying one by his own.

With White's synthetic legs, it gives White a very useful ability - amplifying his leg power. Along with his natural rabbit genes, it assist White in everyday life, but also with more... impractical uses. For example, it allows him to leap incredibly far distances, jump very high, and be a pretty good dancer. However, a flaw to this is the fact that due to it being robotic, it can not bend in every direction, slightly hindering its flexibility.

Because of Schnee's tinkering, she also gave White some more combat-oriented uses. (It's mainly because she'd been watching too many action TV shows.) As long as he refills it constantly, White can fire flames and bullet from his legs when his brain tells his muscles to tell the prosthetic parts to pull the trigger. As a result, White can hover a maximum of one foot off the ground. He can send additional heat to his legs to speed him up and power up his legs, but even if he overheats then they'll be useless for a short to long period of time.

White by Lee, thanks!

An awesome image done by Luvsi! Thanks!

Another White pic that was drawn by Zonian! Noice!

An amazing White picture done by User:N8DASPAGR8IOZ, thanks!

Other sketches by N8, these look neat!

A team picture of White, Tina and Sephtis together! Thanks, Xoph!
Add a photo to this gallery

Retrieved from "https://sonicfanon.fandom.com/wiki/White_the_Rabbit?oldid=1872303"
Community content is available under CC-BY-SA unless otherwise noted.