Start a Wiki
This is an article about Wales Underwood, a character created by Alphonse Uprising on 08/3/2018. 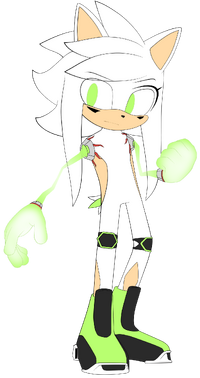 Wales Underwood is a Scottish lynx in the Team Radical universe. Having no arms, Wales had cybernetic implants that allows him to interact with the world with holographic arms made of hard light.

Wales is not an ordinary villain. As a matter of fact, he is not as bad of a person a villain is usually portrayed. He intends on killing the ones responsible for the loss of his arms, although sparing Tesla for rescuing him. Murder is as far as he will ever go; his mindset completely based on his own view of justice and vengeance. The media, however, portrays him as a villain-- a terrorist, even. Something much worse than he wanted to be.

Wales was a caring individual. He was always willing to help anyone in need, a quality required to become a heroic Neo-Knight to begin with. Nowadays, however, he is standoffish and difficult to make trust with, still traumatised by what he recalled as torture during the Guardian Unit's experiment. He hates the organisation with all his might, and will not give up until he sees the day it falls. The only member of the organisation he truly likes, however, is Tesla, who rescued him during a time in which he thought death was certain for him and all hope was lost.

Wales was one of the highest-ranking agents in the Neo-Knights, a British organisation made to protect civllians, the government, and its queen. However, the organisation had folded only 2 years after his recruitment, in the midst of controversy involving leaked documents of the organisation funding Vonnix to continue fighting against it and remain popular in the media. As Wales retired, his powers eventually became useless, in a state of what is known as "powerlessness".

In "Operation Taipei", a covert mission by another organisation like the Neo-Knights, the Guardian Units, agents were sent to capture a former Neo-Knight for experimentation, Wales was taken away from his Glasglow home and into a Guardian Units headquarters in Paris.

The experiment involved creating portals that led to distant parts of the world like a door leading to a different room. They had started out slow, placing the entrance portal to one side of the room and the exit on the opposite side. As it turns out, the portals don't lead directly to their destination; it is a long curvature through spacetime. After going through the portal, Wales was exposed to cosmic radiation so lethal that his DNA had scrambled, causing his body to necrose. The scientists had managed to stop his necrosis in time, but he had already lost both of his arms. The experiment was a critical failure. Rather than letting him live, Wales was left for dead, as the experimentists involved were afraid of him exposing their operation.

Days later, after being rescued by Guardian Units member Tesla Hunt and subsequently asked what had happened, Wales was too much in shock to clearly explain. He was taken to a cyber-hospital where he was fitted with holographic arms capable of interacting with the physical world-- a technology known as hard light, invented by Nadeen Sharma and his late father. Wales is now seeking for revenge, and has planned multiple attacks on the so-called "hero" organisation to expose and punish it for its crimes.

Add a photo to this gallery
Retrieved from "https://sonicfanon.fandom.com/wiki/Wales_Underwood?oldid=1829628"
Community content is available under CC-BY-SA unless otherwise noted.