Hello, hello! Welcome to my page! 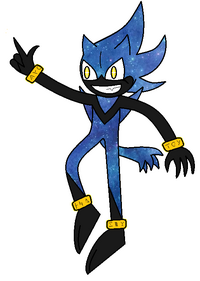 Vul is character made by the user Xtarhaven, I don't care about permissions so use him in whatever you like, (though I guess saying you can use him counts as permission)

Vul is a living manifestation of all the excess energies in the universe, multiverse omniverse, hyperverse, or whatever the hell people use. He was formed slowly over the eons until he finally gained sentience at peak possible power, and now just being “born” he explores the multiverse and whatever lies beyond!

...That’s pretty much it

By accumulating all the energies in the multiverse he has reached the point of infinity and omnipotence, while that may seem OP (and it is) he generally doesn’t know how or want to cheat the system, like say… kill everyone instantly or something like that.

He usually using this power to travel dimensions and generally fuck around with reality, such as floating, phasing through walls, detach his limbs, still use said limbs, and proofing objects into existence. Along with that he can take any shape he pleases, in fact he really doesn’t have a “base” form

Since he is a being made of pure energy he cannot feel pain and tire out without altering reality to allow him to (though why would he) and can almost instantly regenerate limbs, and unless you can erase energy than he can comeback even if it seemed you obliterated his body. Though if you can, it’ll take a while for that to work fully since he has a lot of energy, but it is the only other way to hurt him. (and it REALLY hurts)

Now, he isn’t really the battle type, in fact he mostly just spectates, but he sometimes gets the itch to fight. When he does he doesn’t go full god mode, he likes a (semi) fair fight.  By that I mean he matches the power of his opponent to a perfect degree, and overall copies your moves, abilities, power ups, items, etc... Though he likes to add twists attacks. (I would give examples but I can’t think of one)

PS; He has no gender or sex, but I call him a male for simplicity (though you can call him female if you want to)

He was only “born” recently, although I'd say he has the mind of a 8 or 10 year old. That’s to say he’s incredibly curious and oblivious, without inhibitions and little understanding of moral standards. Though even with this he’s usually nice to everyone he meets. He likes to follow interesting people, and specifically doesn’t leave people who hate him alone, just to mess with them~!

(I have a lot more in mind, but I am absolutely terrible at explaining personalities, I'll just work on stories with him and you can figure him out that way ;p) 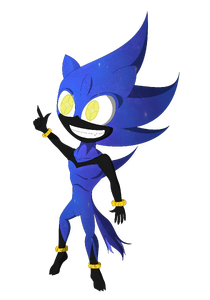 A picture Trisell Chronos made
Add a photo to this gallery

"So you're like a Anti-Me?...Is your name Luv then?"
—Meeting Moros for the first time

"You're in there? Hehe, neato!"
—To Lunari as she's joined with him

Retrieved from "https://sonicfanon.fandom.com/wiki/Vul?oldid=1754545"
Community content is available under CC-BY-SA unless otherwise noted.