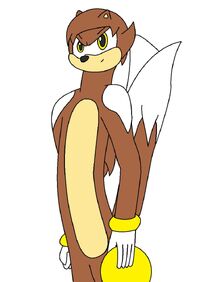 Voltage has the eyes and spikes on his back and head like a hedgehog, but also has the tails of a fox. His fur is brown with white details. He wears White gloves with gold, energy resistance rings on each hand. And yellow shoes

Voltage is a cocky hedgehox who only has one thing he enjoys. And that's killing other people. He kills anyone he desires. He usually challenges the victim to a fight, and if they lose... They lose their life.

During his childhood his family loved him with all his heart. But Voltage didn't love them, or anyone back, in fact he loathed everyone. He wanted the world to be less popular. So he killed everyone he knew, including his family. At the age of thirteen, he became a paid assasin. For good or for evil. During his murders, he found his lightning blade. But one time, he was paid to kill the general of GUN. (Chris The Hedgehog). He knew this would be a challenge. So he joined GUN as an undercover assasin. He waited until he was given full trust until he striked. But Voltage wasn't the only one who had a secret. Chris knew about the blade he carried and wanted it. So they both tried to kill each other. Chris wanted to kill him for the blade, and Voltage had to do his job. But they both failed. And ever since that day, he only killed for fun, just like he used to.  But instead he tries to find out the next victim's weaknesses, so it's easier to strike.

Because of his blade, he is able to control electricity, absorb electric shocks, Create energy out of electric particals. He is also as fast as light. He can make a storm whenever he wants.

His main ability is Named Joul Burst. He creates a giant ball of electricity. That energy then goes into his body making his energy wavelenth much higher. The energy inside him is either used to increase speed, strengh and defence rapidly for a period of time, or it can all be released as an energy beam.

Retrieved from "https://sonicfanon.fandom.com/wiki/Voltage_The_Hedgehox?oldid=1541632"
Community content is available under CC-BY-SA unless otherwise noted.