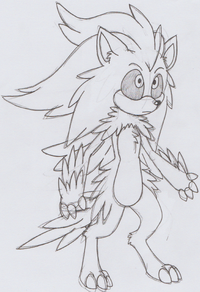 The smallest of the Advanced Creeperhogs, Volaris has a fairly petite frame, with long, sweeping quills on her head; the longest quills nearly reach to her lower back. The quills on her back are long and shaped almost like wings. She has feather-like tufts of her forearms, shoulders, flanks, and thighs, and she also has a fairly short tail flanked by long feathers, not unlike the tail of a bird.

Her fur is primarily silver in color, with a white muzzle, chest, and stomach, while her eyes have teal deer irises with black scleras. Her claw-like fingers and toes are also gray in color.

Volaris was created during the events of Attack of the Creeperhogs.

Being an Advanced Tornadic Creeperhog, Volaris is armed with the ability to use aerokinesis, and at a much higher level than her weaker brethren. With her lighter frame and long, wing-like back quills (as well as being able to trap air under her quills and upper body 'feathers'), she's capable of gliding for long periods of time; she can even achieve limited flight this way. She fights carefully, using her high agility to dodge opponents and strike quickly when she gets the chance, and takes care to retreat when in danger. Like the other Advanced Creeperhogs, she is armed with natural weapons in the form of her teeth and claws.

Apart from standard (yet powerful) Wind-aligned abilities, Volaris can also draw in wind gusts from nearby sources or Wind-aligned to strengthen her own attacks, or unleash all the stored energy in one large burst. The power growth gained from absorbing the wind happens steadily, but slowly, and eventually caps. She and Cerauna are the fastest among the Advanced Creeperhogs, being able to run at 80 mph on all fours, and can dash through the air at an even faster speed of around 100 mph.

Volaris is resistant to the Elements of Poison (being able to use her aerokinesis to nullify Poison techniques) and Nature, and immune to the Element of Wind. She can also absorb Wind-element attacks and become stronger, up to a certain point. A constant gale of wind surrounds her when when she's reached her limit of wind-absorption.

While not durable, she's highly agile, and her focus on self-preservation (as opposed to Fuego), as well as her keen senses, makes it hard for people to get the drop on her.

Volaris is weak to the Elements of Earth and Electricity. She's probably the least durable of the Advanced Creeperhogs, but makes up for this with her speed and reflexes. As a manipulator of Wind, being physically restrained practically nullifies her aerokinesis.

Like the wind, Volaris is fickle, and her focuses and interests tend to bounce all over the place. She's a bit more timid compared to the other Advanced Creeperhogs, and generally attempts to avoid people; however, she is prone to curiosity, and, if her interest is sufficiently roused, she'll more than likely show herself in order to check out what piqued her curiosity.

Her nervous nature makes it easy for her to be scared off; however, if cornered, she'll fight back to the best of her ability.

Retrieved from "https://sonicfanon.fandom.com/wiki/Volaris_the_Tornadic_Creeperhog?oldid=1833315"
Community content is available under CC-BY-SA unless otherwise noted.