The owner of Void the Jackal is currently rebooting this page. As such, some sections may change drastically. 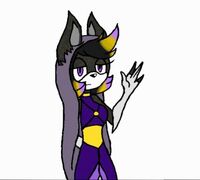 "I don't care how long it takes, how much time I waste. I will bring the Mother more children, weed them out from the ignorant sheep that roam this world. I don't care how much they beg for mercy and cry for help. I will make them believe. I'll spill as much blood as necessary for my precious Mother..."
—Void on her devotion to the Corrupted.

At the surface, Void is a quiet and kind person who won't step out of her personal bubble. She acts almost like a mother, putting more concern into others instead of herself. However, once someone becomes more "valued" in her eyes, the true nature of Void is released. In reality, Void is quite cruel and sadistic, pushing away any hint of mercy. She prioritizes the wishes of the Mother and does whatever it takes to please her. The same applies to those within the cult. If one of the members were to step out of line, no matter how big or small of an issue it was, Void sentence them to a harsh and possibly fatal punishment just to please the Mother.

Void was born on April 10th, 1987 to two unamed parents. For the first 6 years of her life, things would be quite mundane, seeing how her family wasn't all that special. However, on September 7th, 1993, Void's parents were murdered by a hooded figure. Void wasn't able to see their full face but she was able to here them mutter, "Malizia calls for you, child." Void blacked out after that and woke up the next day in an orphanage.

The orphanage workers seemed to avoid any question that Void brought up about her parents, making little Void fairly frustrated. As time passed and her questions still going unanswered, she began to grow cold and distant, causing the other kids in the orphanage to single her out.

On February 17th, 1996, Void severely injured another child in the orphanage who had been bullying and playing tricks on her. Void stabbed the girl's eyes out and left gashes on her chest with a pair of scissors. Void was immediately taken out of the orphange's custody and placed into a mental hospital.

The hospital kept Void in solitary confinement out of fear that she'd hurt someone else. She spent a year in the hospital, until someone broke in and kidnapped her. This person was a cat named Serenity, a member of the Corrupted who was ordered to retrieve Void. Serenity brought the jackal back to Malizia, a town that was made for the Corrupted. There, Void met Cassia Krystalia who, at that time, was the leader of the Corrupted. Cassia stated to Void that she was to be the next leader and offered to give her training and teach the ways of the Corrupted. Void agreed without hesitation and thus began her training.

Void gained the power to use necromancy when she went around the world studying it. With this power, Void can bring dead creatures back to life as well as summon souls so she can connect them to other bodies or objects. Void mostly uses this power to bring more people to the Corrupted or to gain information on various subjects.

Along with gaining necromancy, Void gained the power to communicate with spirits. This helps her when she summons spirits due to the fact that she can use this power to speak directly to them. Besides speaking to them, Void can create visual conceptions of these spirits in order to allow others to see them.

This song applies to Void because of how she views the world, how people turn their eyes away from the evils of man instead of facing them head on. 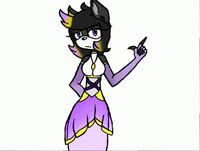 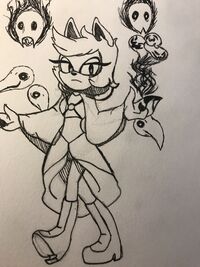 Retrieved from "https://sonicfanon.fandom.com/wiki/Void_the_Jackal?oldid=1790726"
Community content is available under CC-BY-SA unless otherwise noted.