This is an article about Vladimir Harkonnen the Ram, a character created by Jaredthefox92 on 09/25/2015. 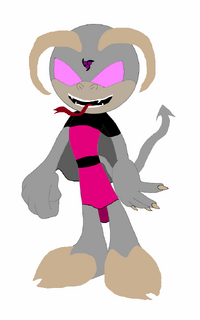 Vladimir "Harkonnen" the ram is a half demon and antagonist in Jaredthefox92's Sonic fanon series, Flawed Deities.He is what would be considered a subordinate officer to Arnzarel and his children in the Army of the Damned, as well as a recruiter of sorts. While not as powerful of a demon as Lilith, Vladimir is still very troublesome, as well as obnoxious and witty.

Vladimir appears as a repulsive adult Mobian Ram that is half demon, and half goat.His eyes are known to glow a bright pink with demonic energy and he has features such as a serpent's tongue and a demonic tail.Being a goat he is known to have ram horns, as well as hoofed feet. Finally due to becoming a half-demon, Vladimir's fur and flesh hasturned into a dull and pale grey.

"What's the matter? You lot are dassled and amazed  by my lovely face?"

Vladimir is repulsive and obnoxious in every way, as well as power hungry and quite boastful. He is not one to be quite and is often known to be outspoken as well. However, Vlad is known to be quite the comedian and likes to joke in both lighthearted and cruel when given the chance.He can also be very condescending and dry humored at time, especially to those he feels are weaker and inferior than himself.

While not as powerful of a half demon as Lilith, Vladimir is known to use his own inherited demonic powers quite liberally.His demonic powers do make him a threat regardless as he combines them with his with to attack weaker targets and go after more mortal foes that would be beneath his master's attention.

Like many demons, Vlad is particularly weak to light magic, especially that of champions of Helussa. Compared to other and more demonized members of the Army of the Damned, Vlad is somewhat lacking in power. However, Vlad is not meant to be a front line fighting demon, but rather an officer and 'summoner', (recruiter). Vlad also is vulnerable to silver as many demons are as well.

Retrieved from "https://sonicfanon.fandom.com/wiki/Vladimir_Harkonnen_the_Ram?oldid=1626880"
Community content is available under CC-BY-SA unless otherwise noted.