Start a Wiki
This is an article about Vivian the Tiger, a character created by DeliciousPandas on 06/4/2013. 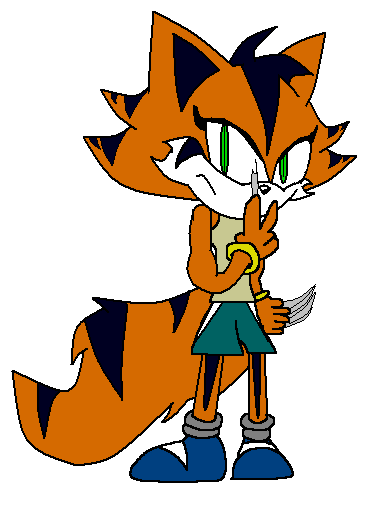 Vivian is a copper-colored south asian Tiger with oversized hands one of which has long claws at the end of them which are unsheathable, the other hand containing a single broken claw on her index finger. Vivian's muzzle has two spikes of hair, the top pointing downward and the bottom pointing upward. Vivian's eyes look like that of an "angry reptile" with a striking bright green, and their unreflectiveness. Vivian's nose is pointed like a curved downwards triangle. Vivian has a small tuft of hair on the top of her head, which is crossed by a strip running down her forehead to center-face. her hair points upwards on the sides of her face and in the back, each having two blue-black stripes on them.

Vivian is rather strong and it shows in her arms, which Vivian shows off by wearing sleeveless shirts or tank-tops, and while they usually can't be seen; Vivian has two stipes on the backs of her arms. Vivian will commonly wear shorts or jeans, her legs have a black stripe on them. Vivian's shoes are semi-dark blue, and have a single white band on them.

Vivian isn't exactly the friendly type, in fact she's the opposite. Oftentimes she won't greet people when she sees them or if she does; it will be usually followed by an insult or name-calling. Vivian won't follow orders at all unless from her teammates, or in a dire situation. Vivian is often described as rude, vulgar, and just plain unhappy.

Vivian's pride-and-joy is her fractured claw, which she shows off so her opponents make sure she means business. Vivian also doesn't have a good sense of humor and will often reply to joking around with a hit-upside the head or a hard slug in the chest.

Because Vivian is a power-type, Vivian's strength is not only immense, but she can preform all the standard power-formation moves as well as a few moves of her own.

Vivian does not follow any specific types of martial artistry and prefers to fight her own styles and own methods, and she will often take advantage of her strength by completely overpowering her opponents with her bare hands. Vivian can also spinjump and roll, but cannot spindash or preform anything like the Homing attack.

Vivian also has a hard grip on the world around her, and is immune to any kind of psychic, mind-based or telepathic attack. The power rings on her wrists also grant her the ability to skip over water (granted she's moving fast enough), preform better spinjumps, and sometimes boost her speed depending on how much energy is charged within the rings.

Vivian was born in Oil Ocean Zone to a the poor and sick Marryson family, who worked in Oil Ocean for long hours with little to no pay (otherwise they would've been roboticized.) Vivian's parents were often too depressed to pay attention to anything Vivian did and often shrugged it off when she got hurt. Vivian tried to get them to pay attention to her, even going to great lengths such as punching her parents to get them to so much as say her name.

Vivian herself doesn't remember too much about her childhood; but she does say that whenever her family had the money, they would bake a few loaves of bread together, which was something that made Vivian happy (in fact, it's the only time Vivian ever recalls being joyful like that.)

About two months after Vivian's 14th birthday, her mom had died from smoke inhalation and her father had fallen ill. Vivian decided that there was no other choice, she had to help her parents, otherwise she'd be dead on the streets before she could blink. One day, Vivian was taking a stroll in Oil Ocean when she noticed a poster on one the oil pipes. The poster was advertising a challenge that if someone could fight six other contestants and beat all of them; they'd be paid 110 Rings.

Naturally, Vivian was overjoyed and went to go train. Unfourtunately, Vivian was well distracted while training and only thought of the positives of after when she fought (and truth be told, she only trained for 2 days.) Eventually the big day came and Vivian was up in the ring against a Bulldog. It didn't end well. Vivian was in the ring a whopping two minutes before she eventually collapsed from exhaustion, beaten bloody as her vision hazily faded out.

When Vivian awoke; she realised how stupid she was being to only think about the good of things; and she decided from now on to be more con than pro when it came to her outlook on things. For the next 4 years, Vivian spent her life working the bag, lifting weights and rising her way to glory.

When Vivian came back into the ring again; she was the best competetor. Her blind fury led her to go completely going crazy in the ring (in fact, half the time you had to PULL HER OFF her opponents.) But Vivian still won 110 Rings, and was content with that. She entered again and again and found fighting to be a good way to blow off the steam that had been building up for all those years of her life.

When Vivian had come home from her last fight of the month, she found her father to not be there. Instead he had left a note on the kitchen table. The note said that her father was going away and that he didn't care what Vivian thought, he was tired of not working for any pay and he was tired of his daughter using violence to get what could've easily been obtained without it. Vivian didn't care though, she didn't know her father well enough to care.

So Vivian packed up her things and left the house to rot into a pile of mud. Using some of the money she got from her last fight, Vivian hitched a bus out to Oil Ocean's outskirts and started to leave the city.

Before she left the city however, she saw a sight that bothered her, three older hedgehog triplets that were trying to what looked like; beat up a chimera. Vivian rushed over and shooed the triplets away. The chimera explained that she was being attacked out of discrimination because everybody thought that she was "Insane." The chimera introduced herself as Schizo, a runaway who had been diagnosed with autism. The two immediately became friends (probably becuase of their similarites) and decided to travel together.

At first, Vivian didn't like Stiletto at all, but as they spent more time in the train, they warmed up to each other and found that you shouldn't judge people by their intrests and their past. When the train finally came to it's last halt, they had arrived in the new zone. The zone was mostly pine forest and had lots of giant mushrooms within them. The trio decided to start looking for a place to settle in the wilderness, after some time; they heard something.It sounded like cheap music. Upon further inspection of the noise; they came across a giant passenger plane which had crashed, but was perfectly supported by the surrounding giant mushrooms.

It took about 2 months, but eventually the plane was looking a lot better. Schizo had fasioned the plane seats into beds; Stiletto had installed the radio into the plane's control panel; and Vivian... well Vivian just got rid of everything that was dead inside the plane.

An Opprotunity for a Occupation

Within a few days, the trio was running low on supplies, and Vivian was listening to the radio while Schizo slept and Stiletto was panicking. Until a news bulletin came on. Reporters were saying that a band of dangerous outlaws had been spotted around the New Mushroom City area, the only city within Pine Shroom Zone, and that they were wanted; Dead or Alive and that a 500 Ring reward was in place for anybody who would bring the outlaws or show evidence of their assassination.

Naturally, Vivian wanted to go collect this bounty, so she dragged Stiletto and Schizo along for the collection of this bounty and went to Shroom city to go and get these outlaws.

When Vivian found the outlaws' hideout, which was on a rooftop; they battled to no end before finally, all of them were taken out.

The trio dragged the lot into the police station where the outlaws were immediately jailed and Vivian's team was given the 500 Ring reward.

Ever since, whenever the opprotunity came or someone requested them to come; the newly founded "Team Skullcrackers" would be there to come to their aid.

Retrieved from "https://sonicfanon.fandom.com/wiki/Vivian_the_Tiger?oldid=1673061"
Community content is available under CC-BY-SA unless otherwise noted.