Start a Wiki
This is an article about Violette the Hedgehog, a character created by FlowerOfTheWind in January 2014.
This character is a recolor. Please consider drawing some of your own art, or removing the recolored images.

The author of Violette the Hedgehog considers this page to be unfinished. As such, some sections may change.

Hi, my name is Violetta DeRanca Galimiéro, but you can call me Violette the Hedgehog. I love Daniel so much that I want to marry him! And if somebody touches my baby then I will KILL THEM! GET IT? KILL'EM ALL! HAHAHAHAHAHAHA!

— Violette's mostly used quote when introducing herself so someone.

Violette the Hedgehog is one of the minor characters in FlowerOfTheWind's universe. She's an anthropomorphic 13-year old purple hedgehog and has a crazy crush for Daniel the Hedgehog.

Violette has bipolar disorder. In the outside world, she's a soft and kind-hearted girl who wants to be together with Daniel. However, in her true form, she's a brutal, sadistic, and worthless-minded monster who would push people out of the way just to look after him. She also hates Inferno the Cat, by calling her for a "stupid cat". As in the matter of that, she's still a stable but otherwise silly person.

Like other members of the Team Daniel, Violette doesn't have a specific history. And her mother sent her to Mobius because she thought that somebody was trying to pimp their home.

Violette possesses earth manipulation, shape-shifting, superhuman strength and even her own weapons, She uses the hammer to summon plant vines from the ground to absorb the enemies.

One of her main transformations. In this form, her clothes and appearance have a more darker tint and has black bat-like wings coming out of her back and bears her axe. She uses them via the Dark Emeralds mixed with the Chaos Emeralds to achieve tis transformation. She often scares/threatens Inferno by it by calling her for "her worst nightmare". 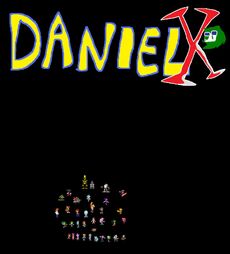 Another old picture from me, at the same year (2014).
Danliette recolor from Sonamy.jpg
Another recolour from 2014, with Daniel included.
Violette The Hedgehog.jpg
Recolour from 2014.

Violette in Female Furry Doll Maker.
Add a photo to this gallery
Retrieved from "https://sonicfanon.fandom.com/wiki/Violette_the_Hedgehog?oldid=1824438"
Community content is available under CC-BY-SA unless otherwise noted.