Violetta Sakura is the mother of Erica Sakura. She is much like Vanilla the Rabbit, however she served a secret service for a while in her younger years. One of her eyes was poked out during a mission, hence the eyepatch. Although she and Erica live in seperate homes, Violetta loves her daughter very much. 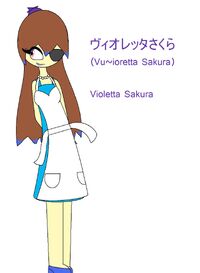 As previously stated, Violetta was part of an unknown secret service, which she doesn't talk about often. When she turned 27, she met a man, got married, and had a lovely baby girl (Erica Sakura). While Erica was still a baby, Violetta's husband left and was never heard from again, and most presume he is dead. When Erica turned 12, she decided to pursue a career as a video game hero, and Violetta allowed her to leave the house and get an apartment with her teammates. Violetta sometimes visits Erica when she gets the chance. Violetta loves Erica very much, and couldn't imagine what would happen if she saw someone hurt her child.

Violetta is a kind, loving mother. She is very supportive of Erica, and is quite proud of her.

Violetta has brown hair with blue highlights; her bangs somewhat resemble Erica's. She wears a blue dress with a white apron and a string of pearls, as well as blue high-heels. She has an eyes patch over one of her blue eyes. Violetta sports a single blueberry on the back of her head, as if it were a bun.

Retrieved from "https://sonicfanon.fandom.com/wiki/Violetta_Sakura?oldid=1542520"
Community content is available under CC-BY-SA unless otherwise noted.