The author of Violet the Hedgehog (Sonic Boom) considers this page to be unfinished. As such, some sections may change.

Violet the Hedgehog is a hedgehog residing on Bygone Island. She works as a news reporter, writer, and journalist and travels around in search of new material. 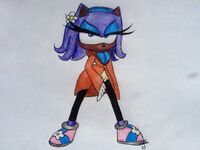 For the tone of Sonic Boom, Violet's outfit was altered to look more sporty and emphasize her flexibility more. Unlike Team Sonic, Violet was not given the traditional sports tape, as she is on no one's side but her own. Her personality was slightly changed.

Violet appears in the game, mainly just to give a single quest.

In "The Sidekick", she volunteers to tryout to be Sonic's new sidekick. The only reason she wanted to was so she could record Sonic's every movement and make them public, much to Sonic's dismay. After being disqualified, she isn't seen for the rest of the episode.

In "Translate This", Violet visited Team Sonic and noticed the UT Bot. As it was reading people's minds, Violet gleefully exclaimed that the robot was perfect—right afterwards, the UT Bot revealed that Violet was thinking about spying on Sonic. After giving a nervous giggle at this, the UT Bot was stopped before it could reveal Amy's crush on Sonic, which made Violet suspicious.

In "My Fair Sticksy", she appeared at the Awardy Awards, while not being nominated, she instead filmed everything with her camera and had her microphone ready for interview. After realizing Eggman didn't receive the award, she expressed a small hint of dismay.

In "It Takes a Village to Defeat a Hedgehog", while Eggman and his buddies were fighting against Team Sonic, Violet was behind a bush, filming everything gleefully. Then Shadow caught her eye and she zoomed in with her camera to see him clearly. She took a couple pictures of him, then ran away while he was saying his final words to Sonic. At her home, she places a photo of Shadow on her bulletin board and gazes at all the other pictures. Violet then says that she will know more about his mysterious hedgehog.

Her skin is brown and her fur is dark violet. Violet's hair reaches past her shoulders and curls up at the end. Her eyes are diamond-shaped and her irises are cyan.

Violet wears a sky blue headband with a white flower on the left side. Her tunic is light blue with a salmon pink collar. She has a ribbon around her waist the same color as her collar and a small yellow ruffled skirt. Violet wears long black leggings reaching her ankles. Her shoes are pink with a flower identical to the one on her headband and sky blue lines around it. Her gloves have pink ruffles and silver rings around them and her shoes also have the silver rings. Occasionally, she wears a brown coat.

Like her main series counterpart, Violet is very dedicated to her job as a journalist and is willing to put herself and others in danger just so she can get her job done. She enjoys sneaking into people's private business and doesn't care for other's feelings as long as she gets her work done.

Despite her obsession with her job, Violet loves meeting new people and enjoys discovering new things. She particularly likes interviewing Sonic, mainly to tease Amy. In fact, Violet seems to dislike Sticks, most likely due to the fact that she finds her annoying.

Violet is very stubborn when it comes to her work—and anything else. She believes things need to be a certain way and won't compromise easily. It would take a lot of convincing to get her to.

Being an interviewer, Violet has good social skills and uses them to her advantage.

Though being very flexible, Violet is not very strong. And her stubborn attitude sometimes gets her into trouble.

Seeing him save the island a couple times, she slowly begin to gain an interest in Sonic. She isn't too open about this, but she's interviewed him more than anyone just to get closer to him.

Before, Violet didn't seem to have much against Amy, until the UT Bot almost revealed her crush on Sonic. Violet is very suspicious of this and doesn't want her to get too close to Sonic.

Retrieved from "https://sonicfanon.fandom.com/wiki/Violet_the_Hedgehog_(Sonic_Boom)?oldid=1798430"
Community content is available under CC-BY-SA unless otherwise noted.