How could you do this to me? I tried to make a simple plan to embarrass Krys in front of the whole university, and you take a knife and stab me in the damn shoulder? I hope you burn in fucking hell for what you did, you little piece of shit. I'm ordering the university's security to keep you 100 yards away from the campus. If you don't listen to when they say that, then I'll make sure they will have you dead.

— Victria talking to Fright about what he has done before pushing him through a window. 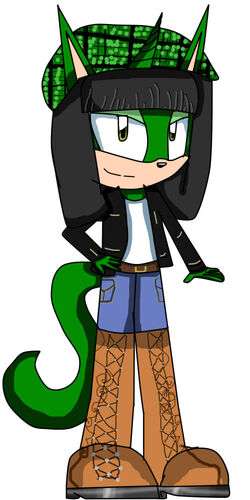 Victria the Unicorn is a fan character created by Darkest Shadow. She is a student at the MaryAllen Magic Branch of Gaudia University, and is one of the best magic users in her area. She used to use magic to mind-control other students at the university and basically made them her slaves, but stopped after being threatened to be expelled.

Although Victria is one of the main villains of the series, it doesn't necessarily make her evil. She's actually a pretty nice person if you know her well enough. She will always be there for you when you need her, until the end. No matter what the risk, she will do whatever she can for her friends. All you have to do is be nice to her, and she'll return three times more than you give her.

Victria also is a quite literal-minded and serious. She doesn't really understand sarcasm or jokes, which makes her seem a little weird in front of others. Saying a silly expression like "I'd rather jump off a building", she'd give them a rope and trampoline so that they won't die. This could also be where her evil-traits come in, because if someone says "I'd rather kill myself", then she would take out her knife and almost stab someone.

If someone ever gets on Victria's bad side, it won't be very pretty. She will hate that person for the rest of his or her life and try to seriously hurt that person. She'll even attempt to kill them if they drive her that crazy. She's done it before, so watch out.

Victria stands at a pretty tall 3 feet and 7 inches and keeping her weight a secret. She has dark green fur with rather short black hair that goes a little below her shoulders. Her muzzle, inner ears and skin underneath her fur are all peach. The front of her hair have rather perfectly symmetrical front bangs. Her tail is long and dark green. Her eyes are are a light hazel color. Her ears are long and point upwards. Her horn is also pretty long and has a very spiral like design to it. Her scleras are disconnected with one eyelash on each eye.

For clothing, Victria's style is rather simple. As a hat,she wears a black and dark green checkered flat cap with holes poked in for her ears and horn. She wears a black leather jacket with many zippers over a white tank top. For pants, she wears simple light blue jeans with a brown belt with a golden buckle. For shoes, she wears knee-high brown designer shoes with a three-inch heel and silver soles. As an accessory, she wears a bunch of thin golden rings around her arms like a bracelet.

For most of her life, Victria has been studying magic endlessly. When she uses her magic, her horn emits a dark green aura, along with the objects/people she is controlling. She always likes to learn new spells that make her grow even stronger. Doing this takes complete concentration. As years went by, it got easier to manipulate and easier to take control of it. She has learned numerous amounts of spells over the years, along with her trademark manipulation spells such as Infatuation, Mind-Control and Hypnosis.