Start a Wiki
This is an article about Victor the Celloid, a character created by Neko Vira. 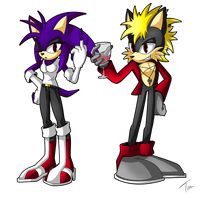 The Ladies Mobian
Basic Info
Name
Victor The Celloid
Full Name
Victor
Gender
Male
Species
Celloid
Alignment
Chaotic Evil
Relationship Status
Varies
Personal Info
Likes
Wine, Power, Boasting, Women
Dislikes
His Family, People who get in his way, The Hell Gate
Friends
None in truth, Several in their minds
Foes
Anyone who sees him for what he is

Victor is a Hyena-like Celloid, he has blonde hair and eyes that shift between yellow, orange and red depending on the lighting and his mood, his fur is black and tan and he dresses in his own sort of fashion.

Victor is suave, cool-headed and ambitious at all times. He is also heartless, egotistical and obsessed with power. There is little that Victor fears and no one seems to know what he does fear.

Victor was created, along with Raven (Neo the Celloid) to store parts of Spawns being, Victor was given Spawns Colossal strength and the mission to keep that power in check. Victor instead waited for his father to create the last Celloid then began an onslaught on the entire multi-verse. Since then, Victor has killed countless people and destroyed entire universes of life.

Victor originally had no forms of energy based attacks, however he learned Ixis magic later on in his life. With it he can turn people to stone for short periods of time, summon lightning strikes, and break trough most conventional barriers.

Victor has a godly amount of physical Strength, he can atomize small planets with a full powered punch. This strength also enhances his speed putting him on par with Sonic if at full power. He can completely control this power allowing him to put it into smaller portions.

Victor shares a Giziods Ability to Memorize Attacks used on him, through this he can calculate ways to counteract most attacks used against him.

Victor rarely fights at full power, because of this if he defeats his opponent in the first fight, he loses interest an leaves, he also can't memorize certain fighting techniques that are chakra based. He has no energy attacks at first so he can not harm people who he can't get close to.

Retrieved from "https://sonicfanon.fandom.com/wiki/Victor_the_Celloid?oldid=1798895"
Community content is available under CC-BY-SA unless otherwise noted.