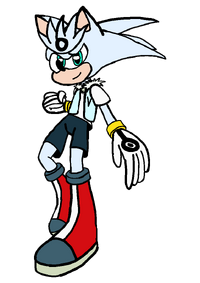 He looks similar to Silver, just with more clothes and different shoes.

He grew up in Onyx City, the Good Future version of Crisis City, with his younger brother, Silver and his parents.

He can use psychokinesis, like his younger brother, Silver, he’s just better at it.

He is good at parkour.

Retrieved from "https://sonicfanon.fandom.com/wiki/Venice_(Sonic_Ultraverse)?oldid=1881351"
Community content is available under CC-BY-SA unless otherwise noted.