Start a Wiki
Picture made by moi

Vendetta the Thylacine, or better known by her full name as Vendetta Sviridov, is the Moebian Counterpart of Tectonic the Thylacine.

Vendetta tends to talk in short sentences [mostly because of her dislike to answer questions]; she usually doesn't talk very much at a certain time.

It is also notable that she has a very slight Russian accent.

Vendetta isn't usually like the other Moebians. She is actually very quiet, and will only speak unless she is spoken to. Though, she retains a somewhat sadistic, and violently creative side to her personality. She does not take well to criticism, and gets angered very easily by it.

It is very hard to gain her trust, if it is possible at all. She barely trusts anyone, and even if she does, she is still cautious (and somewhat shy) around them.

She dislikes mostly everyone around her. She is usually rude to everyone, no matter how old or young, weak or powerful. If threatened, she will eather snap back (albeit quietly), or just a look of anger will appear on her face.

Vendetta, being Tectonic's counterpart, knows many of Tectonic's physical attacks. She also possesses Geokinesis, like Tectonic. She has astonishing lower-body strength, making her legs a dangerous weapon. Mixed with her Hand-to-Hand Combat skills, she herself is very dangerous. Vendetta's very short temper can also be intimidating to others, giving her an upper-hand when fighting.

Vendetta has many of the same weaknesses as Tectonic. Fire frightens her and weakens her greatly. Due to her intimidating nature, others try to stay away from her, making her somewhat sad, and angry (showing that she barely has any friends). When it comes to certain subjects (let's say romance and the more advanced version of that), she becomes physically ill (very sick stomach) and cannot function properly. Sometimes she just can't function on her own; she'll start panicking when in a situation, but will try her best not to show it (she ends up looking very silly, though).

At first, Vendetta doesn't trust him, but she finds him an interesting fellow and friend (and that Vendetta views Jeremy as her older brother) when it comes to torturing a certain unfortunate hedgehog, and finds him to be an ideal Mobian to torture, considering that Dismal is very weak.

Vendetta enjoys embarrassing and torturing Dismal. She finds it entertaining that he can regenerate, so that he can be killed over and over again. Even so, she is quite jealous of Dismal, because he gets to experience all the different kinds of death.

Vendetta has a very negative attitude towards Jake. Jake drives her to her annoyance, mostly by flirting with her. This leads to the two having a dangerous sparring match. Other times, Vendetta shows no emotion towards Jake, usually ignoring him when he tries to speak. Vendetta also harshly threatens Jake, hoping to get him to stay away from her.

Vendetta deeply despises Tec, and is quite embarrassed that her (Vendetta's) prime counterpart is a twelve year old. Ven is completely oblivious to Tec's kind actions to her, and in fact, doesn't even bother paying attention to her.

Ven is one of the few that know Idalis enjoys helping Dismal. Because of this, Ven often acts cold and emotionless towards Idalis. On rare occasions, Ven will even inflict physical pain on Idalis, or start a fight with her (which Ven loses quite a lot, due to Idalis having the upper advantage).

her new design, created by moi 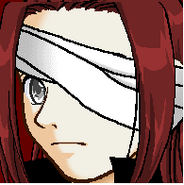 Human-version of Vendetta
Add a photo to this gallery
Retrieved from "https://sonicfanon.fandom.com/wiki/Vendetta_the_Thylacine?oldid=1825102"
Community content is available under CC-BY-SA unless otherwise noted.