The author of Vendeta the Hedgehog/Zeroverse considers this page to be unfinished. As such, some sections may change.

Please. We've met in the past. I've seen you. You have a job, at least. You think you have nothing? You couldn't hold a candle to what I've lost, to the guilt I feel. And I'm still here and fighting. I'm not ranting about it like some kind of child. I'm carrying out my duty. I'm still helping the universe. You could do so much more but you're bogged down by your belief your life will always be a pile of ****. Well, here's some news for you: it doesn't have to be. 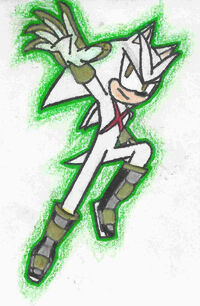 Vendeta the Hedgehog is the Guardian of the Chronosabre and protector of the universe, similar to his Primeverse counterpart. However, there are some notable changes between both versions of Vendeta.

Same as his Primeverse counterpart

His life until the present is the same as his Primeverse counterpart.

After being teleported into the the Lamak Zone, Vendeta discovered the unconscious body of Ion the Hedgehog. After discussing their arrival with various others who were stuck in the same predicament and the Zone's residents Team Mask, he joins the group and goes to Turles' (a boy who claimed he had information on why they were teleported into the Lamak Zone) treehouse. While there, he encounters Tel-Eth, who he tries to attack, although he is quickly trapped by Tel-Eth's psychokinesis. Tel-Eth then reveals he has similar goals too the group and joins them in the treehouse.

Later, after talking to Mackenzie the Tiger about feeling some sort of dèjá vu, Kennedy the Chaos Tiger warps the group to central Trikon City, where he meets the Rulers, who are trying to destroy the town. He battles the enslaved Xavis Pyrovolt, but is quickly defeated when Luna the Bunny throws Kennedy into him. Vendeta tries to reason with Xavis, stating that he can try to help Melissa Craw, who Luna threatened to kill if Xavis didn't help her. The Saviors lost the battle with the Rulers and Vendeta was teleported into the overhead portal, where Scratch the Kitsune scolded him for his lack of musical knowledge. After a failed attempt by him and Elias the Echidna to turn Scratch's game on it's head using his knowledge of alien music, Vendeta and the other people in the overhead portal battled Scratch, Tina the Bat and her Gizoids. After the group won the battle against Scratch, Vendeta and some of his allies (although some chose to stay behind) traveled through a portal into an arena being constructed by the Rulers including Tel-Eth, who had changed sides during the conflict. Luna then sent Vendeta and some of the other Saviours present to a volcano where another group of Rulers and Saviours were fighting, as they were taking far to long to do their job. Vendeta then preceded to help Mac fight the Genesis Lord. Genesis Lord was eventually forced to withdraw, prompting the other Rulers to leave as well.

Roleplay:Hunt For The Elemental Orbs

After his return to Kryte, Vendeta was attacked by Vendeta Blue. During the fight, Vendeta Blue activated his boundary gate and warped both of them into the Fearful Caverns, specifically the Point of No Return. The two then continued to battle.

During the battle, the two Vendetas were discovered by Mac and his allies Scarlet the Fox and Sephtis the Eagle, who were searching the caverns for treasure. Mac helped defeat the robot wnd the grouped carried on deeper into the caverns. As they continued down the tunnel, they met Lightning the Hedgehog, who while initially threatening warmed up to the group, and a girl with an axe called Charlotte. Charlotte mistook Vendeta for the one who betrayed Luna in Depths of Dimensions and tried to dispose of Vendeta while the others weren’t watching. Their battle was soon interrupted by the return of Vendeta Blue. While Lightning, Max and Lightning defeated Vendeta Blue, it had awoken Calamis, who was guarding the treasure that Team Mask was looking for. While Team Mask Dulles the beast, Charlotte, Vendeta and Lightning went to retrieve the orb. However, Charlotte tried to kill Vendeta again, revealing that she was working to resurrect Luna. During the battle, Vendeta managed to get a hold of the orb while Lightning and Charlotte fought. After Calamis broke out of the caverns, Vendeta continued to fight Charlotte alongside Lightning and the Dark Clan.

Appearances that Vendeta has made that require little explanation. Bolded examples are canon, italic examples are non-canon, other examples are dubiously canon as they have not been mentioned in canon material but do not directly contradict canon.

Although initially disliking the GUN agent for his naivety and getting in his way, Vendeta got on relatively well with Max eventually and fought alongside him against Eggman. Although Max has been wiped from time in the Lamak Zone, Vendeta still remembers him due to being outside of that multiverse during the Genesis Wave.

Although they haven't talked much, Vendeta finds Mackenzie strangely familiar. Their duel in the Bloodied Hands Arena convinced Vendeta that Mac is an exceptional fighter, although Mac’s dubious relationship with the law is not yet known to Vendeta.

Sneer made Vendeta a taco once. He liked it. He also still regrets he didn't have any Earth money on him at the time and had to pay in solid gold. After meeting again in Depths of Dimensions and getting to know her a little better, Vendeta believes Sneer to be far more capable as she thinks she is and tries to convince her that she has control over her life.

Vendeta believes Ion to be an inexperienced and naive child, although he can't deny he has astonishing power and is willing too have him as an ally against the Rulers.

Same as his Primeverse counterpart.

Same as his Primeverse counterpart.

Retrieved from "https://sonicfanon.fandom.com/wiki/Vendeta_the_Hedgehog/Zeroverse?oldid=1851069"
Community content is available under CC-BY-SA unless otherwise noted.