This is an article about Vendeta Blue, a character created by MaxIrvaron on a date, and rebooted by Skyblade743 on 23/2/18.

The author of Vendeta Blue considers this page to be unfinished. As such, some sections may change. 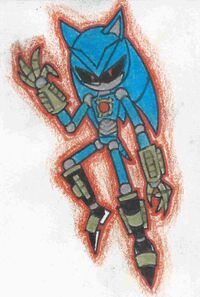 Vendeta Blue is a robotic copy of Vendeta the Hedgehog. Initially used to hunt down him and the Master Emerald, he has since been let loose on the rest of the multiverse to find his eternal rival...or any version of him.

Vendeta Blue has the same physical build as Vendeta, but the similarities end there. Vendeta Blue’s body is made up of smooth blue metal and he lacks a visible mouth. His eyes are black with bright red pupils. The scar present on Vendeta’s chest is also missing from the robot, replaced by a circular symbol which is an energy outlet for the Boundary Gate.

Originally, Vendeta Blue had a vivid personality, regularly scolding Vendeta during their confrontation. However, since his reconstruction Vendeta Blue has been stripped of emotions and speaks in an unusual speech pattern (his sentences all end after 4 words or 4 syllables, whichever comes first). He is entirely focused on his objective of killing Vendeta and any who stand with him.

Vendeta Blue was originally made to kill Vendea and Max Irvaron during the Eggskam incident and retrieve the Master Emerald. However, Vendeta and his allies quickly defeated him. After trying to glean information out of him, Vendeta promptly sliced the robot apart with his psychdarts before flying away with his comrades. Through sheer determination, the robot managed to activate it’s Boundary Gate and warp into the Zeroverse.

Vendeta Blue appears in Tel-Eth’s Origin in the fighting game. He is discovered by the alien and, although he initially fights back, he is taken back to the ruined lab Tel-Eth is using as a hideout. Tel-Eth repairs the robot using the lab’s tech and creates a system to remotely activate the Boundary Gate by hooking Vendeta Blue up to some kind of machine. He then uses it to warp into another dimension.

Depths of Dimensions and να-τιδ

Sometime while Tel-Eth is fighting with the Rulers, Vendeta Blue manages to break free and uses his Boundary Gate, which was still in prime condition thanks to Tel-Eth, to teleport to Platinum City in the dimension να-τιδ. Damaged from his battles with Tel-Eth and Vendeta, Vendeta Blue hides in the shadows and syphons off the city's tech to repair and upgrade himself. After sufficiently repairing himself, Vendeta Blue vanishes to hunt down Vendeta.

Hunt for the Elemental Orbs

Some time later, Vendeta Blue teleported into Kryte and attacked Vendeta. Although exactly what happened in that fight isn't known, Vendeta Blue activated his Boundary Gate and teleported himself and Vendeta into another dimension.

Vendeta Blue teleported the two psychokinetics into the Point of No Return where they began dueling, with Vendeta Blue slowly gaining the upper hand. However, the battle was interrupted by Mackenzie the Tiger, who helped Vendeta temporarily stun the robot and give them enough time to flee. Vendeta Blue soon reactivated and chased after them in pursuit.

Although he caught up with the group, Vendeta Blue was defeated by Team Mask and Vendeta. His fight with the group also unintentionally awakened Calamis, who dealt the final blow to the robot. Vendeta Blue then walked out of the caverns and teleported away to places unknown.

Like Vendeta, Vendeta Blue possesses psychokinesis, allowing him to move objects and fire bolts of energy, although his psychokinesis appears as orange light instead of green like Vendeta. However, due to being far less experienced than his organic counterpart, Vendeta Blue's arsenal is more restrictive, mostly sticking to moving objects and PsychDarts. Vendeta Blue makes up for this by using a weapon known as a Boundary Gate, allowing him to warp anywhere, including into other dimensions, with no restrictions. He can either teleport directly or create portals. The only thing that can stop him are strong teleport blockers. However, the Gate doesn't work properly if it overheats from overuse or otherwise and immediately shuts down as a safety precaution if the energy outlet on Vendeta Blue's chest is damaged.

Vendeta Blue’s only real objective is to kill Vendeta, and he would go to any lengths to achieve it. He views the hedgehog with utter contempt, although whether this is Eggman or Tel-Eth's programming not even he can say.

During their first encounter, Vendeta Blue quickly defeated Max thanks to a surprise attack using his Boundary Gate. However, the two never talk directly and Max no longer exists due to the Genesis Wave.

Retrieved from "https://sonicfanon.fandom.com/wiki/Vendeta_Blue?oldid=1858758"
Community content is available under CC-BY-SA unless otherwise noted.