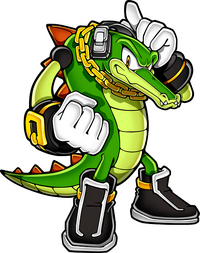 Black and Gray Cordless Headphones (though occasionally seen without)

The Chaotix
Personal Info
Likes
Music and listening to it

Helping those in need

When People don’t pay what they promised

Not having enough money

Not being seen as professional

Emma (to an extent)

Vector the Crocodile, along with his sister, Anna, were born the second and third children to Joseph T. Marley and the late Martha the Crocodile, being the younger brother and sister of Dylan the Crocodile. Two years later, he became the older brother of Emma the Crocodile. Six months after Emma was born, his mother had died, though the causes of her death are currently unknown.

His father was close in business with Rex's father, who had later married a woman with a daughter named Sarah, and another partner of his was a woman with two daughters, Sugar and Vanilla. As a result, he and his siblings would often play together with the other children, while thier parents discussed business matters, since they were close in age.

When he was old enough, Vector had attended Spingsdale school, a school that supported education for the elemantary, secondary, and high-school levels.

Vector still was close with his siblings and the children of his father's business partners. However, it was not long before his father started to take part in some suspcious activity, and soon enough, Queen Aleena had gone missing, and Joseph had agreed to take over Mobius, until her hopeful return.

Convinced thier father had either captured or killed the queen, he, Dylan, and their friend Sarah had formed the Marley and Seawall Detective Agency, in hopes of finding the lost queen, while solving smaller cases along the way. The others in the group who did not join were notable allies.

When Sarah had caught an unknown disease a few months after the Marley and Seawall Agency had formed, he and his siblings were able to convince thier father to get the scientists and doctors to research her disease, along with the moderately significant cases of people who had caught it, in hopes to find a cure and save them. During that time, he and the rest of the group tried to help take care of Sarah the best he could, but she had eventually died, because the cure was not found in time, leaving them devastated. Not long after, the Marley and Seawall agency disbanded, having losing thier tracker, and at the time unable to find someone to match her skills.

Not long after, his older brother, Dylan, had gotten his girlfriend, Sugar, pregnant with his child, and Dylan turned to he and Anna for advice. They both agreed that he should help Sugar take care of the baby, both before and after it was born. Not long after, Rex and Vanilla were also expecting a child at a young age, though the two revealed they had eloped, knowing thier parents would not approve, but there were records showing the two were legitimately married,despite that they had lied about their age to do so. Vector would on occasion help their friends when they needed it. However, six months into Sugar's pregnancy, she had delivered early and nearly suffered a stroke. Sugar lived, but her daughter, who she and Dylan had agreed to name LaRae, died one hour after she was born, leaving the new parents devastated. He was among those who had comforted the two about LaRae's death, feeling a bit saddened himself about his niece's death.

Vector does not formally appear in the first part of Chapter 1, but is mentioned once by Charmy, when he requests for Sonic not to let him know about his truancy. When Charmy refuses to let Sonic into the chili-dog-eating contest for free (since the admittance fee is five rings), Sonic tells Charmy that he, along with Jerome, will be the first to know about his truancy.

The first time he is mentioned in the second part of Chapter 1, though not by name, is when Charmy is tempted to kick Sonic in the back of the head for being mean to Blaze, he remembers that Dylan is nearby, and since he is not only Vector's older brother, but also the head of a separate branch of the Chaotix, they have a close connection. This, along with their connection with the police leads Charmy to the decision to stay out of the situation. He is mentioned again when Charmy puts on a falsely clueless face is about to meet Rouge up in the trees, remembering that Vector told him that sometimes one had to act a bit dimmmer than he really was to give them a false sense of security.

Vector is seen in Charmy's flashback, when he, along with the other Chaotix members are in Dylan's office for a brief yet important meeting. After Charmy starts singing the word "safe" over and over again in an unplanned melody, Vector turns his music on in an attempt to tune him out. When the meeting ends, he did not understand anything that was going on at the moment, because he had been so busy trying to tune Charmy out. He apologizes for not listening and asks what just happened.

The first part of Chapter 3 is taken from Vector's POV, written in second-person narration. He, along with Espio are arriving at the mansion of Alta Hayes, owner of the Hayes graveyard (formerly known as the Jansons Graveyard), called there by officer Jerome Bee, who explains what they need to do when Hayes believes her house is haunted. Vector gets into an argument with Jerome when he finds that Charmy is not with them, presumably "wandering the streets", but this is soon broken up by Espio, who tells them this is not the time to be unprofessional.

While Vector and Espio are searching the foyer for anything suspicious that may have to do with the "haunting" , he tells Espio he thinks Jerome may be too protective of Charmy, even though it is likely he is just trying to be a good guardian, however, Espio ignores him the whole time. When he reveals this, he tells Vector to take that as "payback" for not listening to the meeting the week before. The two then decide to split up and look for clues around the mansion.

After some searching, Vector finds the parlor, and silently remarks that if there was really a haunting, the room looks untouched. He notices a painting of the previous graveyard owners' family, on the mantle of the fireplace, and Jerome gives a brief history of them. Though it is not Ms. Hayes' family, Jerome mentions she did not want to take it down, as she thought that was disrespecting them. Vector asks how Jerome knows so much about them, and Jerome shows him the manilla folder he was reading, intending to put it back soon afterwards. Deciding that there is nothing suspcious there, Vector decides to begin looking elsewhere.

In the second part of Chapter 3, taken from Espio's POV, he is seen coming up from the basement, covered in spider webs, and looking disturbed, asks Ms. Hayes if she thought about hiring an exterminator, and she tells him she intended to get around to it. Charmy teases Vector about being scared of spiders, and Vector raises his voice, telling him he isn't, he just hates being covered in spider webs. Espio requests Vector lower his voice, because he is scaring the chao he found.

After learning that the Chao had imprinted on Espio, Charmy pleads with Vector to keep them, and Vector agrees, but only until the chaos' real mother is located.

He is mentioned twice in the third part of Chapter 3, when Knuckles finds some spider webs in the basement, some of which Vector may have crashed into earlier, and again after Knuckles fights the giant spider, and feels bad for calling Vector a wuss earlier.

He is briefly seen in the first part of Chapter 4, in a flashback of Rex's, when they were playing in the leaves together as children. It is mentioned he looks like his father, but younger.

So far, the only known difference in this universe from his canon counterpart is that he is slightly calmer, first seen in Sonic Fanfiction when Charmy keeps singing the word "safe" over and over again. Instead of getting angry, he simply turned up the music on his headphones and ignored. However, it seems even this paitence has limits, when Charmy teases him about being afraid of spiders, he raises his voice claiming he isn't, he just hates being covered in spider webs.

Vector has super strength, though most noticeably in his jaws, even being able to crush metal with them.

Also, like most crocodiles, Vector is a skilled swimmer, and can hold his breath underwater for long periods of time.

Vector is an experienced detective, and has good observation skills

While Vector cannot run super speed, his speed on foot is noticeably above-average.

Vector: "Yeah, I get that, that he his sister and her husband made an agreement and all that, 'Take care of the kids if anything happens to us' blah blah blah' [...] 'If we die you're their only living relative' blah blah blah 'They'd have nowhere else to go' blah blah blah." [...] "Raise them like they're your own' Yeah, I'd get that. But sometimes, I wonder if Jay's a little too protective. [...] I mean, this ain't the first time Charmy had to find us from a distance. And who knows? Maybe the little moron'll stay home this time. [...] Getting underestimated, poor kid. But maybe I'm a little more relaxed about it 'cuz my old man, he didn't really care, he kinda just let my brother, my sisters and I do whatever the H*ll we want. [...] Maybe he's just trying to be a good father, er, godfather, since they ain't his kids, they're his sister's kids. [...] Yeah, well, whatever. I care about Charmy as much as he does, but come on."

Espio: "Mm-hm. Are you finding anything down there, Vector?"

Vector: "Nothing that has to do with the 'haunting'. At least, I don't think. By the way, were you really listening, or just ignoring me the whole time?"

Espio: "I was ignoring you."

Espio: "Take that as payback for not listening to the meeting last week."

Retrieved from "https://sonicfanon.fandom.com/wiki/Vector_the_Crocodile_(IncaIceBunny%27s_Universe)?oldid=1838146"
Community content is available under CC-BY-SA unless otherwise noted.