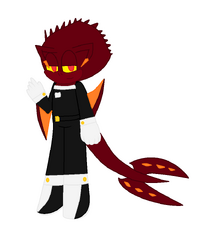 Varusa's scales are a deep crimson color, while his muzzle and the armor-like design on his chest (Which is never seen because he always has something on) is a lighter shade of the same crimson. His eyes are milky-red while his sclera are yellow. He has a triceratops-like crest and two curved horns on his forehead. Varusa's attire is a normal business outfit ([1]) with black shoes with a large white stripe on the top and white soles. Varusa's arms have wyvern membranes and his tail is clubbed. There are six openings on the tail, the tip of the horns, and the membranes that glow fiery-orange when angry.

Varusa is you're stereotypical ISTP villain. He is calm, not one to jump to conclusions. He is respectful and doesn't mean to be rude. Even thought he is a villain, he isn't to fond of killing people, and only does so if he feels it is necessary. He doesn't get irritated easily and has high tolerance. Though, he can be very emotional and gets stressed easily.

A power he had inherited from his grandfather, Varusa has the limited power of being able to manipulate the earth around him. The best he can do with this power is cause very small earthquakes.

Varusa gets his pyrokinetics from his father. He is more skilled with this power then geokinetics, being able to create fire tornados and create figures out of fire. But he rarely uses these powers at all.

The openings on Varusa's tail and horns, and his wyvern membranes glow a fiery-orange when he is mad. This does not hurt him or anyone, but is only for show.

Varusa has a degree in architecture and is experienced in designing buildings and other objects. He is intelligent and has the IQ of 126, more than the average person.

With Zarusa's strength in intelligence, he has a weakness in physical power. He doesn't have expert knowledge when it comes to melee fighting, but he isn't useless in a fist fight.

Retrieved from "https://sonicfanon.fandom.com/wiki/Varusa_D%27Era?oldid=1828544"
Community content is available under CC-BY-SA unless otherwise noted.