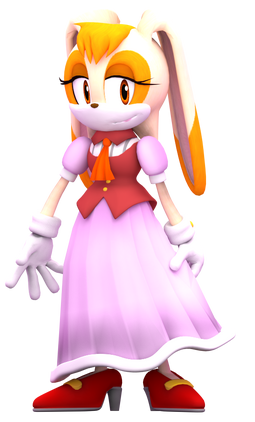 Vanilla the Rabbit is a mobian rabbit, Cream the Rabbit's mother and Bunnie D'Coolette's aunt. She currently lives with Cream in Mobotropolis on Westside Island.

Vanilla is a mobian rabbit with mostly cream-colored fur, brown-orange markings on her ears, around her eyes,and on her forehead, where she also has brown-orange hair. She also has a white muzzle, brown eyes, and pink skin inside her ears. For attire, she wears a lavander dress with a white trim, a burgundy vest, a red ascot, low-heeled burgundy heels, white gloves, and pink lipstick.

Not much is known about Vanilla's past, but she has been said to have come from a wealthy family and was Nutmeg's older sister, who was Bunnie's mother. Vanilla would be forced to be apart of an arranged marriage to Coffee the Rabbit and while they mutually agreed that they didn't really love each other, they remained married until Chocolate's, Vanilla's father, passing.

Vanilla is a calm and composed woman. Liker her daughter, she is nice, polite, and is very willing to help others. While she has no problem with Cream going on dangerous adventures with Sonic and his friends, but she personally prefers a quiet lifestyle.

Retrieved from "https://sonicfanon.fandom.com/wiki/Vanilla_the_Rabbit_(Marshalia13%27s_Universe)?oldid=1852108"
Community content is available under CC-BY-SA unless otherwise noted.