"You do that while I go get some ice cream."
—Val

Valarie Fox(ヴァレリー·フォックス Vu~arerī· Fokkusu) or Val is a 7 year old, anthropomorphic purple fox from Crisis City, a destroyed town 200+ years in the future.

Valarie hails from Crisis City, an obliterated town 200 years in the future. She lived there with her mother and other inhabitants. Her father disappeared before she was born, so she never knew him, but has a synthetic Chaos Emerald that her mother claims was given to her by him. When she was around the age of four her mother died, leaving her alone to live with her friend Silver the Hedgehog. She learned a lot on how to survive in the time's harsh condidtions with time, as well as finding a deep dilike for the city. One day when she was around the age of seven a mysterious portal opened up in front of her that teleported her 200 years back in time to where she is now.

For her age, Val is more on the mature side, but she's still just an innocent, fun-loving little kid. Generally, she's cocky, sarcasitc, and a rather impatient yet bubbly spirit. But at times, she can be a bit mean and tends to get irritated easily at times.

Valarie game play is similar to a mixture to Amy's and Sonic's. She cannot do a spin dash, but she can do a spin jump, though she cannot attack enemies with it. Instead she either sweep-kicks the enemy or does a front flip and drives her foot on top of it. If she is about to fall in a bottom-less pit and has at least 10 rings, she can do a Chaos Snap and warp back to the last checkpoint, but looses all her rings as if she died, but does not lose a life. 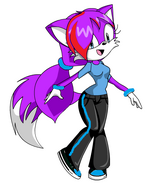 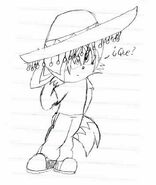 Val in her winter attire 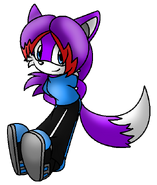 Drawn by sonykitten553 on deviantART 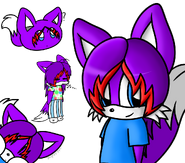 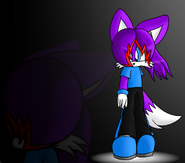 Valare's birthday is recorded as April 17th, which put her under the zodiac sign of Aries
Add a photo to this gallery

Retrieved from "https://sonicfanon.fandom.com/wiki/Valarie_Fox?oldid=1800738"
Community content is available under CC-BY-SA unless otherwise noted.