This is war. Survival is YOUR responsibility. 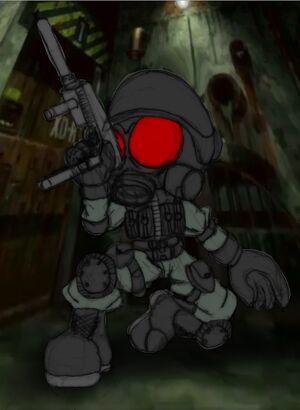 VICE the Death was a Special Operative within the Station Square branch of G.U.N. military services. Almost nothing is known about VICE's history or even his real name. The earliest piece of information relating to him was that he was trained at the Prison Island in 1996.VICE has carried out a large number of successful operations, many of which he was the only one to return alive from. This earned him the nickname "The Death".

VICE is hardened, emotionally-distant and cold-hearted. He cares not for the well-being and safety of others or even the implications of dealing death to those who are his targets. However, despite these personality traits he knows what it means to make a successful mission; reliability, teamwork and focus. VICE has been known to work alongside operatives and at times has aided their survival if only to help progress the operation at hand.

VICE has only been known to of gotten along with three other operatives; Special Agent Spectral to whom was a Mobian Chameleon whom VICE based his ChamSuit on; Special Agent Seto Jinrai who was the squad's sniper and marksman expert; and Special Agent Jake "Metalface" Kaiser who went MIA after a near-botched operation to retrieve traces of Black Doom's blood upon the Space Colony ARK some time after its initial raid. It was not friendship or love that they found with eachother, but their unrivaled teamwork and chemistry together was what drew them together.

VICE signed up to the G.U.N. military services at the tender age of 18 in the year 1989 after hearing of their exploits on the Space Colony ARK back in 1951. After three years of basic training and inductions into the military unit he was seen as an exceptional operative. For years VICE would partake in warfare operations with varying squardrons, but always he would be the only person left alive through either fluke or tenacity. His survivability came into question but, from the Chief Director's orders, VICE was to be promoted and was then transfered to Prison Island in 1996 at the age of 25 to learn more advanced training techniques to be efficient enough to join their newly devised Special Operatives unit.

Within 5 years he was introduced to his fellow comrades Spectral, Seto and Jake. For years the team would be directed to "contain" certain enemy threats. These operations included infiltration, recovery, escort, and assassination. However, a raid on the Space Colony ARK in 1998 proved to be their downfall. The entire complex was overun by abominations and "Chaos clones", to which the team of four were not prepared for. In the battle Spectral was killed in action by a Chaos clone, Seto was able to secure a two man escape pod to which himself and VICE boarded, while Jake held off the attackers as VICE secured several vials of Black Doom's blood. Jake was then considered Missing In Action due to his uncomfirmed death and lack of body found in 2001.

After his landing back on Earth in the North Atlantic Ocean both operatives were rescued by the Royal Navy Forces and taken back to England for questioning. After days of incarceration for potentially breaking the Fair War Act in terms of use of chemical warfare, which had been banned after the Shadow Project in 1958, they were released on technicality. Seto decided to remain in England as a "free man", while VICE had returned to G.U.N. to deliver the vials of Black Doom's blood before leaving G.U.N. the next day to become a soldier of fortune. G.U.N. has sinced tasked their newest Special Operations unit with eliminating VICE.

As an operative in the military services VICE has access to a number of gadgets and weapons at his disposal, all of which was procured either during his own time upon operations or given to him by the G.U.N. military service.

The ChamSuit is the clothing that VICE wears under his combat jacket, gloves, boots and pads. The clothing is made of a dense polymer material fused with millions of nanobots. These nanobots scan for materials that touch them before recording their colors, patterns etc then "displaying" them outwards, making a camouflage pattern upon the material in just a few seconds. This helps VICE blend in with the surroundings as he presses against surfaces, such as brick walls, concrete floor, between pipes, amongst barrels, etc.

VICE's guns use a series of clips that utilize the "rotary" system; the clip is able to re-chamber another set of bullets into the expended casing or jacket, allowing for double the ammo in one clip.

The Veil mask was created in 1986 as a prototype before being finalized in 1994. The mask as a selection of breathing apparatus that can filter dust, smoke, water and other thin inhalation hazards, as well as a selection of various optical settings such as magnification, infrared, night vision, and electromagnetic vision.

VICE's main arm was the Steyr Tactical Machine Pistol, which had good handling in terms of recoil, was light and compact. However, the gun was not accurate unless its collapsible stock was extended. VICE's TMP also had a silencer attached to the barrel. Through modifications made by G.U.N. the TMP could fire bullets stronger than that of a standard issue USP and had an extended double stack"rotary", allowing for a capacity of 200 bullets as opposed to the usual 30 rounds.

VICE's handgun, a Walther P99 prototype, was given to him by his father as he served in the G.U.N. military services since before the ARK raid. The gun was a customized Walther P99 which had the recoil chamber lessened and the clip size increased by using double-stack clips and the the rotary system, allowing for a clip size of 48 rounds of 9x19 Parabellum rounds, or 40 .40 S&W rounds, as opposed to a quarter of those in a standard clip.

The gun has since been upgraded by G.U.N in order to match the finalized, mass-produced model released in 1994. The gun also uses a laser sight that mounts on the front of the trigger guard. In 1997 VICE modified the outer casing of the gun, but not the slide, to incorporate the ChamSuit technology.

A handgun that was improved upon after the mass production of the Eagle 6.0 with the chamber capacity of Desert Eagle .50 caliber rounds, the 8.0 bears its name for the eight inch barrel on the gun as opposed to the prior six inch barrel. With an attached scope it is used by VICE as a "sniper" handgun. G.U.N.'s modifications has allowed the gun to chamber the 1911 ACP .45 rounds as well as S&W .50 magnum rounds. The handgun runs on double-stack clips on the the rotary system, allowing for 60 ACP rounds or 48 S&W rounds.

Retrieved from "https://sonicfanon.fandom.com/wiki/VICE_the_Death?oldid=1295277"
Community content is available under CC-BY-SA unless otherwise noted.