Hello everyone! :D Thank you for participating in the winter awards ^^ Now, here are the results! (and final rounds)

Getting nearly every vote (except for Smash himself), our best make character is...

Smash The Echidna! But Smash, you may have to put the award on there yourself, since I can't edit it xD

Our best female, winning with one point to spare, is...

Smash The Echidna and Lucinda the Angelfox will now compete for Best Character award. Leave your votes below.

We have a tie between Twilight the Lycalo and Statyx the Hedgehog. Leave your votes below.

Another tied category! This one is between Blizzard the Wolf and Tyquone the Necro Harvester. Leave your votes below

And yet another one...This one is between Pearl The Echidna and Scott the Wildcat.

Winning by two points, or once again smartest character is...

This character, with a whopping total of 8 points, is...

This very adorable sidekick really deserved an awards ^^ Here we have...

This is tied between Ryder The Hedgehog and Lionel the Raccoon. Leave your votes below.

With a very close call, this character managed to get one more vote. Our most beautiful female is...

This character has the most amazing back story ever ^^ Our winner is...

Winning with 6 points, our best attack is...

We've got some pretty good items. Our best is...

Woah, here come the weapons xD Our winner is...

Tied between Roleplay:Resurgence and Roleplay:The Nightmare before Christmas. You know what to do.

Of coarse, there's always the best fangame ^^ Winner is:

I'm seriously starting to think we should just remove this category...There's WAY to many tied. 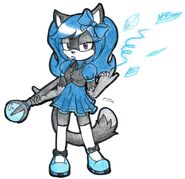 Statyx the Hedgehog: "I was taught that one gains power only when they close their hearts, when they can do the darkest things without regret...but I've learned that when a person puts their heart into the battle, when one's resolve is tested, when one must risk everything to protect what they care about, then and only then, does one gain true power!!"

Thanks for entering everyone ^^ Now let's get these final votes done...

Retrieved from "https://sonicfanon.fandom.com/wiki/User_blog:Nikki-Kaji/SFW_Winter_Awards_2013-2014_(Results_and_Final_Rounds)?oldid=1473312"
Community content is available under CC-BY-SA unless otherwise noted.