So Hey! I've decided to start a new roleplay after being semi-inspired by a ProjectSNT video. It's a crossover RP, not only between Pokémon and Sonic the Hedgehog, but between wikia sites, as to get a wide range of perspectives.

The main catch of this RP is that each participant will have two seperate characters for each faction, one that has a chosen Pokémon species and the other one that has been completely randomized. Let me explain:

Once you've decided to join, you will pick a number between 1 and 100, after which I will use to generate a spreadsheet of various pokemon. These pokemon will have completely a random type(s), ability, and moveset and it is your job as a writer and/or artist to make a consistent and well thought out character from this. It'll look something like this: 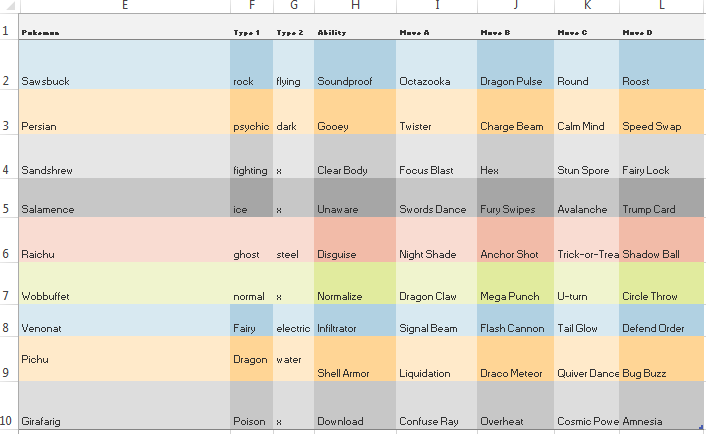 Of course, the Sonic twist is that your character is a Mobian, they've just got a Pokémon species. Instead of being something like a fox, they would be a vulpix or fennekin or something.

This is a future-dystopian sci-fi setting, so you can use any sort of robotics, weapons, items, or even natural traits in order to justify these moves and abilities. And don't worry, I'll make sure to reroll any ability or move that would be useless without changes to the rest of its kit. If you don't like it, I can always reroll as well ^^

this is my randomized character for the group I'll post his finished image alongside his complete profile:

Do you see how I justified his moveset? I gave him a battery-powered fire whip in order to let him use fire lash and spin while also giving his a high-tech gauntlet with speakers to let him use his sound-based moves. In his final picture, he'll be much more fluffy and be icy-blue as well. It's pretty fun to think of how to design a character around this. This lets you think outside of the box and justify what would normally be ridiculous traits.

Your other character is a normal Pokémon of your choice, standard moves, abilities, and all. I figured that would be a nice consolation prize for having to pick a randomized one. You won't have to put the same amount of effort into this one as the randomized character though, as they will mainly be antagonists.

So yeah, in conclusion, I put a good bit of thought and effort into this roleplay and I'd love to share an experience with all who would be interested. So, if this concept interests you in any way, please check out the wiki page for Pokémobius: Chaos and consider joining.

If you have any questions or concerns, leave a comment and I'll get back to you ASAP.

Here's a Link to the Page

Retrieved from "https://sonicfanon.fandom.com/wiki/User_blog:Austin_Bison/Pok%C3%A9mobius:_Chaos_is_Open_to_Join!?oldid=1831422"
Community content is available under CC-BY-SA unless otherwise noted.