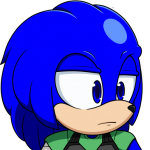 aka Frost, Gizmo, Yusef are other aliases.

Veteran SFW user an admin since 2010. I've put my main focuses on finishing out my (currently unnamed) series and my RPG fan game. I've been striving to be an author since I was a child. As such I plan to eventually break away from the Sonic fanon to create an original series largely based off what I currently have down now.

blame elly for giving me this idea

Basically grouping my characters into Tiers of sorts in terms of their strength and battle skill. Villains excluded. Expanding to include others that appear in the series.

S-Rank - The best of the best. Either the strongest, most experienced, or just the best pick for battling.

A-Rank - Very good, well-rounded fighters. Not the best, but they've got it where it counts.

C-Rank - Nothing special. Sometimes great at supporting the real fighters, though aren't all that good alone.

D-Rank - Little to no battle experience. Basically the load.

NotEvenFighter-Rank - what are you even doing on the battlefield

Retrieved from "https://sonicfanon.fandom.com/wiki/User:Smash_The_Echidna?oldid=1853389"
Community content is available under CC-BY-SA unless otherwise noted.