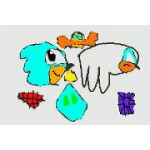 Sparkey: I wonder where this awesome person is. She is a great friend

Evilbreaker: Awesome dude, thats all I got to say.

Leif Ericson (er1c1996): <------ Sole person who made a charater that soner or later has a crush on RavenCool. He is awesome pawsome.

Retrieved from "https://sonicfanon.fandom.com/wiki/User:RavenCool_the_Wolf?oldid=1424449"
Community content is available under CC-BY-SA unless otherwise noted.